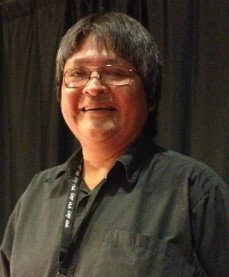 Todd learned the art of fetish carving mostly on his own. A relative made a small bear for him to use as a “guide,” and then he “took it from there.” After high school Todd went to school at New Mexico Tech, with a major in Geological Engineering. His knowledge of rocks came from those geology classes. “I had no idea that I would end up becoming a full time artist, but the classes that I was taking really helped me get a better understanding of the stones that I work with now.  I have been carving since January of 1990.”

Todd says that the question he is most often asked is “How long does it normally take you to carve a fetish?” Observing the care he takes in forming and finishing each piece, an appropriate answer to this question might be, “It takes as long as is required for the carving to be truly ‘finished’ by his standards.”

Todd has won numerous awards and first place recognition at competitions throughout the United States. His dolomite buffalo was selected to grace the cover of the book: A Guide to Zuni Fetishes and Carvings Vol.2 by Kent McManis.

“Since a fetish is believed to have a spirit, as though it were alive, I want people to get a sense of security and happiness from my carvings. Whenever I’m about to work, I put any worries aside and try to have only good thoughts so that those would be passed on to anyone who comes in contact with the fetishes. I’ve always enjoyed collecting unusual rocks. Now in addition to collecting them, I give them new life. Earlier influences and an imagination play a big role in transforming ordinary rocks into the different fetishes.”

Todd shared with me that recently, he has been part of a project with the Geology classes at Zuni high school. “The last part of their semesters are geared towards making the connection between what they are learning from their textbooks, to how that pertains to  Zuni culture, through stones (fetishes). After I give presentations on the history of fetishes (including meanings/uses in our culture), the students perform all of the scientific tests (hardness, mass, density, streak, fracture, etc.) on samples of the stones that they chose. Once the tests and reports are completed, I give a carving demo for them, and they actually start carving, on grinders and dremel tools that are set up outside their classroom. I think I’m enjoying the project just as much as the students!

My initial question, to the students, is whether any of them know what fetishes are, and usually everyone’s hand goes up. They either say they’ve seen relatives carving fetishes, or maybe even their parents make fetishes.

My next questions is if they know the history of fetishes, and what their meanings are. So far, no one has raised their hands when that question was asked. By the end of the semester, everyone knows all the basic info, because it is required knowledge for their final reports. It is a great feeling, to know that the students walk away from the class knowing a bit more about their culture.

The students get to learn about local stones, as well as the more “exotic” materials that I use, and then about all the different processes that are involved in making fetishes. I actually show them how stones (basically turquoise, for necklaces) were shaped and drilled, using the old hand-operated grinder and pump drill. I usually use a piece of alabaster for my demo, so I carve it fairly easily, making sure to tell them that it may seem easy when I carve, but it’s only because I’ve been doing this for a long time. They quickly find out what I mean by that.”