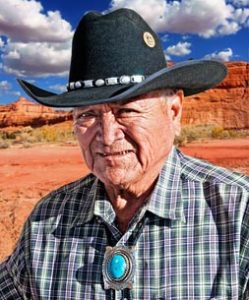 All of Tommy Singer’s work is very distinctive, and is coveted by collectors and enthusiasts alike.

He worked for years with his family creating beautiful jewelry in silver and gold with traditional patterns and designs. Tommy was a silversmith for over 50 years

When he was just seven years old, he learned the art of silversmithing from his father, Tsinnigine Hathali, who was a Navajo Medicine man. Tommy incorporates many traditional sandpainting and rug designs of the Navajo People into his jewelry. Tommy began creating jewelry full-time at the age of 21. His early works were done in the Silver overlay technique.

While working with scrap turquoise chips, Tommy pioneered the technique of chip inlay, a technique of using turquoise or coral chips in silverwork. This technique is used by thousands of artists to this day.

Tommy later returned to his roots by creating exquisite silver overlaid jewelry with intricate designs. He often included 14 Karat gold overlaid on silver. His signature overlaid beads feature prominently in his necklaces. He perfected his craft in a small studio surrounded with his family and other tribal members.

When asked about his work, Singer said, “Every piece is made with the various meanings from my traditional ways – the Navajo way of living. My father was a silversmith, too. He taught me, and wanted me to continue this trade. It was my father’s dream that I learn to silversmith, so that I could continue his beliefs.”  His distinct style of jewelry is recognized the world over. Tommy Singer is considered by many as one of the greatest contemporary Native American silversmithe of our time.