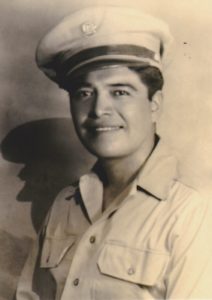 Tony Aguilar was born into a family of jewelers including his own father and his uncle, Vidal Aragon. He learned silversmithing from a Navajo jeweler while he attended the Santa Fe Indian School.  As the president of his class at the Indian School, Tony entered the United States Army during World War II.  Tony was stationed in Iran for over two and a half years, and while there he admired the heavy, ornate jewelry designs of Middle Eastern jewelry.  Tony would return to the United States highly influenced by those jewelry designs.  The resulting jewelry that Tony Aguilar created post World War II was often bold and big with intricate stamp work. He frequently used brass and sterling silver in making his signature barrel beads which was quite exceptional. His designs were considered quite unique and innovative.

Besides his exceptional stamp work and state-of-the-art designs, Tony Aguilar was very his versatile.  He created traditional Santo Domingo turquoise work in which he hand-cut and hand-rolled the finest natural turquoise and coral to create perfect traditional multi-strand necklaces and joclas. At this same period, Tony was also developing his signature barrel beads and multi-strand necklaces. Tony Aguilar is considered by many to have been truly a master jeweler.

Tony Aguilar passed away over a decade ago, but he has left a lasting jewelry legacy.  He had six children, and his youngest son, Wayne, is carrying on in Tony’s footsteps.