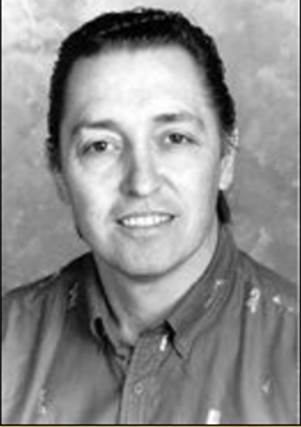 Troy Anderson is a Master Artist of the Five Civilized Tribes Museum, a title which he quite deserves.  Seen as an early leader in the development of western and southwestern art, Troy has been featured in many magazines including Southwest Art Magazine.

Working primarily in acrylic, he is equally adept in graphics, sculpture, watercolor and pastel.  His images are both beautiful and sensitive with subjects ranging from western to wildlife, Native American and Southwest.

Troy has two distinctive styles of painting. One is a more traditional use of the medium in which he has done many pieces depicting the Trail of Tears. Also in this style, he does beautiful portrait pieces, which incorporate his love of wildlife and each piece tells its own haunting tale of Indian legend.  The second style is a build-up of acrylic in a form, which Troy calls Dimensional Images. These paintings are like looking at clouds, at first you see the main central images and after looking more closely you discover the smaller details that have been worked into the work. From faces to a variety of animals, these creations are full of life and draw the viewer into the work.

He is a popular advisor, juror and consultant to galleries, collectors, and museums.  Anderson’s reputation, honors and vast awards from Museums, Art Competitions and shows, such as the  Five Civilized Tribes, Cherokee Heritage Museum, Cherokee Nation, Red Earth, The Heard Museum, The Southwest Indian Market in Santa Fe, and State of Arkansas testify the regard the public has for his art. He is both an author and illustrator and his original artwork is exhibited in galleries and museums throughout North America and Europe.