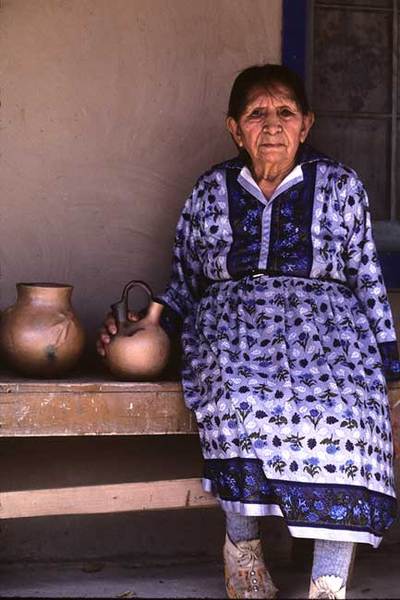 Nobody taught me how to make pottery. My mother made pots. I used to cook and do housework, but I saw her make them. I never thought I would touch the clay. Then one day my husband and my father went for clay. My father gave me a bag of clay and told me, “Daughter this will give you all you need—food, clothing and money.” And, you know, he was right. – Virginia T. Romero, 1989

Virginia was born on ancestral land in 1896. Her parents named her Pop Tő, which means “Flower House” in her native Tewa language. By age 10, Virginia had learned to cook and take care of the house.

In the early 1900s Virginia attended Santa Fe Indian School. In addition to academics taught at the school, children also received vocational training. Virginia and her classmates learned sewing, cooking, laundry and other housekeeping skills. Later she served as interpreter for the tribal government since she was fluent in English and Spanish and could write in both languages.

Ms. Romero began her career as a potter in 1919. As a child she had watched her mother shape clay into water jars, bean pots and dishes, the traditional cook ware of generations of Taos Pueblo women. After her father presented her a bag of clay, she began making her own utilitarian ware. Virginia Romero, her husband, sons and grandson made regular journeys to gather clay from a source about 11 miles from their home.

Ms. Romero cleaned the raw clay, and then ground it on a metate or grinding stone. She screened the ground clay and let it sit until it became “tender.” When the clay was ready, she divided it into a day’s worth of work: some 10 to 15 pots. After Virginia hand smoothed the signature mica clay into a variety of shapes and forms, she let them dry. When they were dry enough, she wood fired the vessels in her horno (outdoor oven) until they glowed red-hot. In her 80 years as a potter, she never lost a pot in the firing. She attributed that success to the fine grind of her clay.

As her father had predicted, the clay gave Virginia all she needed. Money earned from the sale of her pots (and the sale of Joe D.’s drums) supported the family. Family members recalled how Virginia’s fame as a potter brought her worldwide recognition. Today her works are in the collections of the Los Angeles County Museum and the Southwest Museum of the American Indian (now part of the Autry National Center in Los Angeles), the School of American Research and the Museum of Indian Arts and Culture in Santa Fe, and the Millicent Rogers Museum in Taos. 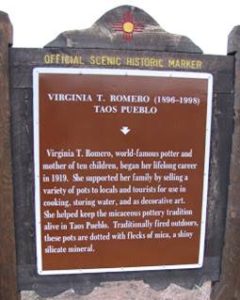 For all the acclaim from the outside world, Virginia continued the traditional ritual life at Taos Pueblo. In September 1994 the Millicent Rogers Museum honored Virginia and her long career as a potter. At age 99 she was the first Taos Pueblo person to receive such recognition. Virginia continued to make pots up to her 100th birthday in 1995. In 2005 the New Mexico Women’s Forum and the State of New Mexico honored Virginia T. Romero with an Official Scenic Historic Marker. It is located on State Highway 150 in sight of her grandson’s family home on Taos Pueblo land.