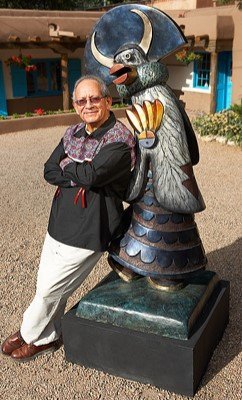 Greyshoes sculpts contemporary, stylized, and flowing forms inspired by the motifs and movements found in the ceremonial regalia and dances of his Native American heritage (Santa Clara Pueblo and White Mountain Apache). Some specific representations have included Apache crown dancers, Pueblo corn, deer, elk, antelope and buffalo dancers. Greyshoes is also known for his  Native American medicine bears and a variety of other sacred animal representations.

Greyshoes works exclusively in stone, including exotic and domestic marble, limestone, alabaster, and onyx. A selection of one-of-a-kind stone originals are then chosen to be cast in bronze in limited editions. These bronzes feature patinas in a range of colors, patterns, and textures.

Greyshoes earned his Bachelor of Arts from the University of New Mexico, is a graduate of the Poeh Arts Center sculpture program, and has been mentored by such eminent sculptors as Evelyn Fredericks, Clifford Fragua, Dale Tsosie, George Rivera, and Nelson Tsosie. Ethelbah served as Chairman of the Board of Directors for the Southwest Association for Indian Arts (SWAIA)—producers of the Santa Fe Indian Market—from 2002-2003.

Greyshoes’ sculpture studio is located in the beautiful bosque in the North Valley of Albuquerque, New Mexico. Private tours and demonstrations can be arranged by appointment. Call 505-270-8080 or email upton@greyshoes.com to inquire.