Christmas is a time for celebration, reflection, and family traditions. These traditions are passed from generation to generation as a way of preserving memories and customs. My parents visited with artists for many years not only during Santa Fe’s annual Market, but in their homes, as well as in my parents’ Santa Fe home. This led to many wonderful friendships with many of the noted Native American artists from the past 75 years. I am excited to be making friends now with the children and grandchildren of these friends of my parents. I love to see the traditions continue through the family – through the generations. 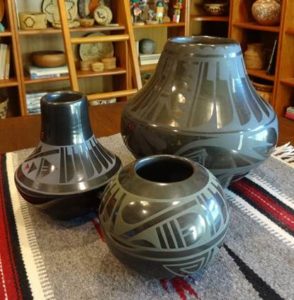 One of my mother’s dear friends was Carmelita Dunlap of San Ildefonzo Pueblo. Mother would make a special point to visit with her during Santa Fe Market each year, quite often purchasing a piece of Carmelita’s incredible pottery. The art of pottery making – in the traditional manner – has been passed down to Carmelita’s daughter, Martha Appleleaf. She in turn has taught the traditional way of making pottery to her son, Erik Fender, Than Tsideh (Sunbird). Martha and Erik collaborate in the making of traditional pottery, just as Carmelita and her aunts did many years ago.

Carmelita was designated a National Treasure during President Nixon’s administration. She won Indian Market first place twenty times, which is still to date unprecedented. Her daughter, Martha Appleleaf is the first artist honored with the Southwestern Association for Indian Arts’ new Traditional Pueblo Pottery award, which has roots among the potters who helped build the Santa Fe Indian Market-traditional potters. Erik Fender, Than Tsideh “Sunbird” (Carmelita’s grandson and Martha’s son) won first place in the 1987 New Mexico Congressional Art at the age of seventeen and in won 1988 first place Santa Fe Indian Market

In an article written in 2012, Martha Appleleaf reminisced about her family’s long line of well-known potters. “I kind of knew what was what with watching my grandmother. She was the one who raised me,” Appleleaf said. “They all sat down together polishing — Maria and Aunt Clara and my other aunt. They didn’t say, ‘Oh, that’s your pot or that’s mine. They all worked together.” Martha and Erik continue to carry on the traditional ways of sharing labor, as well as the techniques of gathering and preparing clay and building, sanding, polishing, painting and firing the pots. Just as her grandmother and aunts would polish together and Martinez’ husband Julian would paint her pots, Martha and Erik share various stages of the process. Despite the tremendous skill, patience and hard work traditional pottery requires, Appleleaf obviously loves her art and has instilled that in her son. “It’s our privilege and honor that the Clay Mother lets us make her beautiful,” she said. “She allows us to do all this to her — and it allows us to have all that we have.”

As I have coffee in the Gallery each morning, I look at the family groupings of traditional potters. There are many here, and I am working to identify many of the family linkages among the pottery that I have. This reflection always causes me to ponder the importance of heritage and family traditions. It is through these family traditions and customs that we are able to honor those who are no longer with us and to revere the earth on which we live. Tradition is the pathway from the past, but more importantly, it is the pathway toward a wonderful future for our children.

Remember those who came before us, and give the younger generation a special hug and tell them the stories of their ancestors and their customs. Celebrate and reflect – simply opposite directions of the same pathway. Create that pathway for the young ones and carry on the traditions of family.

From all of us at The Dancing Rabbit Gallery, we wish each of you a blessed Merry Christmas and a safe and healthy New Year.