For Native Americans, traditions are passed from one generation to the next through the telling of stories.  Though the words may occasionally change, there is always a main theme, key points to convey to the young ones, and conclusions about how one should live one’s life.  The telling of stories, or passing along an oral history of tradition, is highly respected among the Native American peoples, and is visible in all aspects of their lives. 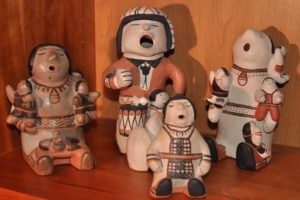 The time honored Indian pueblo pottery tradition of working with clay and telling stories has merged into a modern art form of ‘storyteller’ pottery dolls. The art of making clay effigies is as ancient as the Anasazi peoples who inhabited the deserts of New Mexico many centuries ago. During the latter portion of the twentieth century, it was the Cochiti pueblo potters who were known for clay effigies depicting many different aspects of their everyday life. Yet, it was not until 1964, that Helen Cordero of the Cochiti pueblo created her first ‘storyteller’ figure. I love the tradition of passing down stories of family culture and history to the next generation. The image of small children gathered around a grandmother/grandfather to hear accounts and adventures of long ago lingers with me from my own childhood memories of listening to my great-grandmother share her adventures in Indian Territory (later known as Oklahoma).

Modern storyteller dolls were originally created by Cochiti artist Helen Cordero in 1964. Originally, she created open mouthed female figures with children in their arms and called these dolls “Singing Mothers”. They quickly gained in popularity and many other artists in Cochiti started making them as well. (In the Gallery I have several made by close personal friends of my parents, Ivan and Rita Lewis, as well as one made by Helen Cordero’s granddaughter Buffy Cordero Suina). Helen Cordero eventually made a male figure, modeled after her grandfather, Santiago Quintana, with children clinging to his back and in his lap playing the drum and singing songs of the stories of their heritage and traditions. Cordero believed a male doll was more appropriate, as males were traditionally the storytellers in her tribe. As time went on, more and more artists started making their own storyteller dolls, each adapting their own unique style and implementing their own beliefs based on their heritage.

Today, the term storyteller refers to any human or animal figure that is covered with smaller children or animals. They have become one of the most collectible and sought after forms of clay art. It is estimated that there are well over 200 Pueblo potters now creating storytellers. Every potter has their own special clay, technique, tools, and colors that are used to create their art. Most artists collect their own clay from the earth, and still use the traditional firing techniques that take place in the ground.   Among the most notable families making storytellers today are the Fraguas of Jemez Pueblo and the Tellers of Isleta Pueblo. The mud heads of Dorothy and Paul Gutierrez and the owls of Zuni are but different forms of storytellers- the ones who pass on the culture and traditions of the people.

Adapted from Pueblo Stories and Storytellers Mark Bahti and other sources