Story telling is an art form used to share culture, traditions and fond memories; it can even be used to teach a lesson or two.  New Mexico’s favorite storyteller is Joe Hayes. For children and adults alike, his storytelling sessions outside the tepee at the Wheelwright Museum in Santa Fe are a summer tradition that has continued for over 35 years.  Joe’s tales are a combination of the traditional lore of the American Southwest and his own imagination. 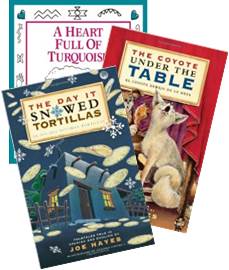 During a few of our family trips to Santa Fe, my mother treated her grandchildren with an opportunity to listen to Joe Hayes share his enthralling stories and to read his books.  My brother Jamie shared just one such family memory with me recently:

My mother had made plans for a day of “literary experiences” for my two boys, who at the time were around 4 and 6 years old.  Being a school teacher, my mother planned days which meant either going to a museum or a cultural center for an educational experience.  With young children in tow, I was all too cautious that she would expect us “boys” to be still and pay attention.  To say I was a good influence in times such as these might be considered a stretch of the imagination.

So the next morning we were awakened to energy and excitement that would rival any Christmas morning, as far as my mother was concerned.  As the day progressed, my mother’s excitement grew; it was late in the afternoon before it was finally time to leave.  We drove for a while and arrived at the Wheelwright Museum. (I sure nailed that one.)

There was a hum of excitement as people walked around, many heading to a secluded area found only by an earthen path way.  As we approached the area, we could see a tepee with a fire pit to one side of it, which projected a feel of a very relaxed atmosphere.  Large logs provided seating in front of the tepee.  We took our places and Mother promptly excused herself and strolled toward a man standing to one side.  He had somewhat long hair, glasses, and was wearing a white shirt and blue jeans.  She hugged him and visited for just a few seconds before returning to sit with her grandsons.

As the sun set and dusk crept in, this plain dressed man walked to the front of the audience and silence fell over the crowd.  He introduced himself as Joe Hayes.  I almost fell off the log I was sitting on.  I had read some of his books to my kids; he was a famous southwest storyteller and author.   Now I understood my mother’s excitement.  Joe Hayes told enchanting stories and spun yarns that made you feel as if you were part of the tale.  My sons were as motionless as I was as he shared his story of “The Day It Snowed Tortillas.”  As the flames of the fire began to die down and the evening came to a close, I went over and hugged my mother, and she smiled and put her hands on my face and glowed.  As if hearing Joe Hayes in person wasn’t enough for all of us, Mom stopped and introduced the boys to him.  A wonderful and gracious man, Joe even signed a couple of books that my mother had purchased earlier and he told us a quick story of his childhood. What an evening! I am not sure who was more excited – my sons, my mother, or me.

My sons are grown now, but from time to time we recall the evening that their “JoJo” -their Grandmother- gave us all something special to remember and to share through the ages–a great memory to cherish.  Thanks, Mom.