That is what his business card says.  But there is so much more to the story of this gracious and highly talented man. 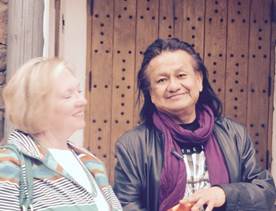 The three mesas of the Hopi Reservation are surrounded by the Navajo Nation, so David grew up with the peaceful, philosophical teachings of the gentle Hopi people, but he also experienced the Navajo in his schooling.  As a very young man, David had the typical interests in music and art that all teenagers have, but he took it one step further and learned the difficult skills of stage lighting, enabling him to begin a career as a lighting specialist with a number of rock bands.  Some were extended gigs, such as his tour with Linda Ronstadt that began in Miami and ended on the West Coast a number of months later.  Others were regional gigs, including artists like Sting.  David won a number of awards from his skill at concert lighting, which was just an early indication of his eye for light and perspective.

David moved into painting as his life on the road slowed down, and began interpreting many of the images and stories that he grew up with on the three mesas of Hopi.  David’s acrylics are bold and vivid, featuring the colors typically associated with the Hopi peoples and his Water clan.

An inner strength carried David through a stroke a few years ago, and he has taught himself to paint with his left hand.  The detail and vibrancy of his work continues to leap from the canvas, and it is simply incredible that he continues not only to paint, but to extend his art into mixed media expressions.

I bought a print from David about 20 years ago, and it hangs in my gallery where I can see it every morning when I have coffee- Arrival of the Water Clan  For years, I have planned to acquire an original from him, and last year when he announced his two-man show at the Museum of Northern Arizona in Flagstaff, I told David that I was coming and ready to acquire one of his originals.   We met David for coffee at a wonderful little coffee shop in Flagstaff, went to the Museum to see his exhibition, and then went through the extended agony of figuring out which of his wonderful works spoke to me the most clearly.

To make a long story short, I picked Medicine Bundle, which is also the one that Michael picked as his favorite.  I also was able to get a mixed media artist’s proof of another painting, Honan Mana which would have been used for producing prints.  Even better, David agreed to have dinner with us that evening, so we went to a nice restaurant in Flagstaff and had a couple of hours of great conversation with this highly talented artist.

And that, I suppose, is how I will always think of David – his talent is a gift, but his wonderful personality is what I think of as pure Hopi – gentle, warm, proud of his heritage yet very humble about himself, and very much in tune with mother Earth.  This is the way of Hopi, and David is an amazing, resilient, and wonderful Ambassador to the world of his people and their traditions and lifestyles.