Margaret Tafoya of Santa Clara Pueblo is one of the matriarchs of pueblo potters.  She passed away at the age of 96, but her legacy is enormous.  Any gallery or museum that features Native American pottery has one or more pieces done by Margaret– or they dearly wish that they had. 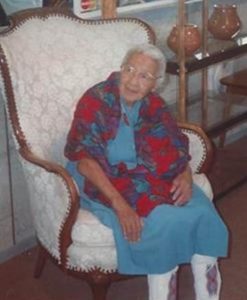 This picture of Margaret was taken by my parents at Toni Roller’s studio during the last trip my mother took before her death. It is one I found in a book on Margaret Tafoya’s life after I returned from meeting her family; it is one I cherish.

A bit of the backstory might be helpful in showing context for Margaret’s impact.  Pueblo pottery has been made in the traditional way for as long as the pueblos have been around, and likely much longer than that.  Certainly the Membres and Anasazi potters were making their items well over a thousand years ago, producing daily use vessels for food preparation and storage, water storage, and other utilitarian tasks.  Typically the pots were made by the women of the pueblo, as the men either hunted for game or farmed the fields.

Clay for the pots was gathered by hand, digging chunks from the earth and bringing it back to the pueblo. After being washed and cleaned the clay was transformed into long coils and formed into pots, thus leading to the term “hand-coiled” as opposed to more modern ways of molding or using pottery wheels.  When the pot was created and the surface carefully smoothed with stones handed down through the family, the potters would often decorate their pots with mineral and vegetable paints, painstakingly applied with yucca fibers as their brushes.  The designs were their art, and symbolic of the world in which they lived. After the paint was applied, the pots were fired in an outside pit, using dried woods or animal dung to create the heat needed to cure the pots.  Creation of a pot was hard work, and many broke during the firing process, reducing all the hard work to mere shards.

Different pueblos had different sources of clay, and they also used different approaches to decorating their pots.  Today, someone who is knowledgeable in pueblo pottery can often identify the pueblo that produced a pot by its clay composition or style.

But the story is even more significant in that pueblo potters passed their knowledge and techniques of making pottery to their children and grandchildren, thus leading to consistent styles that make Zuni pottery distinct from Santa Clara pottery, and so forth.

And that is where we start the story of Margaret Tafoya.  The different pueblos began producing commercial pottery shortly before the turn of the 20th century, as Anglo expansion intruded more into their lands with trains and roads.  Expert potters emerged in each pueblo, and their pots were more highly sought after than those done by other potters of lesser skill.  Margaret, having learned the techniques of Santa Clara pottery from her mother, Sara Fina, emerged as one of the expert potters and Santa Clara pottery rapidly came to be associated with her signature black ware pots embedded with deeply carved designs or her iconic bear paw imprint. In the early years of the 1900s, Margaret shared her polishing techniques with Maria Martinez of San Ildefonzo, as well as a method of firing any clay to turn it black by simply smothering the fire with manure eliminating the oxygen.

As often happens, Margaret married and she and her husband started a large family.  Each of her children were introduced to pottery at an early age, and some took to it readily, while others found different interests.  Margaret was very prolific in her potting, and generated a sizeable quantity of very high quality pots during her lifetime.  In March, when I had the wonderful opportunity to talk with one of her daughters, Toni Roller, I learned that later in her life, Margaret would often doze as she was potting; as she dozed, sometimes she dropped her pot which broke. Her children would simply bring her another pot to continue the process.  Margaret continued potting until she passed away at the age of 96.

The legacy of Margaret Tafoya, and her emblematic black bear claw symbol, continues through not only her pots, but the work of her children, grandchildren, and even great-grandchildren who continue to produce award-winning pottery.  Toni (a daughter) won so many awards in her earlier days that she stopped entering competitions, letting the other potters win some of them.  One of Toni’s sons, Cliff Roller, is also a highly acclaimed potter, and his children are beginning to accumulate awards as well.

The tradition of Santa Clara pottery, thrust into international prominence with the works of Margaret Tafoya, is alive and thriving. As I gaze on my pair of Margaret Tafoya pots, next to the Toni Roller pot, next to the Cliff Roller pot, my thoughts automatically trace the Tafoya family lineage, and the pots become so much more special to me.  Not only are these pots individually wonderful works of art, but they are collectively the story of a family over several generations, and that gives the pots a wonderful voice to tell a magnificent story.  Being able to tell a story such as this is why I collect, and why I try to share these stories with each of you.

And yes, if you are wondering, I will be writing another blog shortly about my amazing visit with Toni Roller and her husband at their home in the Santa Clara pueblo and my lesson in making traditional pottery.  That tale is one that I hope you will all appreciate as much as I enjoyed the Roller’s gracious hospitality.