This blog continues the journey that Michael and I took earlier this year, exploring the towns and museums of Northern Arizona… 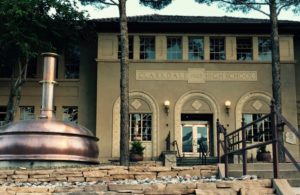 The first thing that you notice about this area is that it takes your breath away – literally.  The altitude rises to over 6000 feet, and for those of us who live much closer to sea level, it is quite a change.  The second thing you notice is also breath-taking – the natural beauty of the mountains, valleys, massive stands of timber, and other aspects of nature at its best.  Everywhere you look, there is another postcard moment.

We began one morning leaving from our Scottsdale hotel to the lovely town of Prescott.  We headed there because the Phippen Museum was hosting its annual Native American art festival, partly located in the Phippen and mostly located on Prescott’s tree-lined downtown courthouse square.  In addition to the adjacent Yavapai-Prescott Native American lands, artists from around the Southwest swarm to downtown Prescott for a great weekend of festivities.  While there, we saw Kim Seyesnem Obrzut of Hopi and her daughter Crystal, and of course I just had to get another of Kim’s magnificent bronze sculptures.  As with most of our acquisitions, we found that Kim happily shipped from her gallery to our home.

The next stop was another National Park Service site, Tuzigoot.  A three-story pueblo ruin built on a hilltop, the structures comprise about 110 rooms and were built by the Sinagua people about a thousand years ago.  A fascinating feature of the Tuzigoot structures is the use of trapdoors in the ceilings instead of doors in the walls, providing additional security for the residents.  The hilltop has a commanding view of the Verde River valley below, where the Sinagua peoples farmed.

We then headed to nearby Clarkdale, which was founded a hundred years ago due to extensive copper mining in the area.  About sixty years ago, the copper mining ceased, and the economy of Clarkdale went into hibernation.  Recently, however, the towns of Clarkdale and nearby Jerome are emerging as artist centers, and the old Spanish Colonial architecture of the downtown business district is coming alive once more.

Our first stop in Clarkdale was quite by accident.  We entered Clarkdale and immediately saw the old two-story Clarkdale High School.  What was unusual, however, was the large copper distillery kettle outside the school.  Our curiosity aroused, we pulled over and discovered a hidden gem.  The high school had been converted, over the past two years, into the home of the incredible Arizona Copper Art Museum.

We went into the Copper Art Museum where we were warmly met at the front door by the owner/curator of the museum, Drake Meinke.   He told us how the Museum celebrated everything copper: from military usage, to kitchen and drink usage, to art and architecture.  We knew from our own high school days that Arizona was known as the Copper State, but this Museum really drove home the many uses of copper found in European and American lives.  The Museum has different categories in each of the former classrooms, and each separate gallery could easily take hours to view.

Next door to the Copper Museum, we found a nice little wine bar, Four Eight Wineworks.  The bar is a cooperative venture of a number of local, starting winemakers who are experimenting and producing some very nice wines.  They have a nice tasting menu, so we each got a different flight (so we could share and taste twice as much, of course) and a very tasty cheese and crackers tray.  They had a young lady, Tara Lynn Walrus, singing and playing her guitar, and the small comfortable setting was just what we needed after a long, dusty day of exploration.  After picking out our favorites, we sat for a while with the managing director, Joe Bechard and talked about the co-op founder, Maynard Keenam of Caduceus Cellars, and his efforts to work with the Yavapai College to boost the winegrowing industry in Arizona.  So of course, we ended up having a case of our favorites shipped back to our home.

It became a long day, so we happily piled into our car and drove to our comfy hotel room, chatting about all that we had seen and learned that day, and planning for the adventures facing us in the next few days to come.