Midway through our recent adventure, we relocated from our hotel in Scottsdale to a different hotel in Williams.    The town of Williams is a cute little community located on I-40 to the west of Flagstaff, and is where the main turnoff to the Grand Canyon is located. 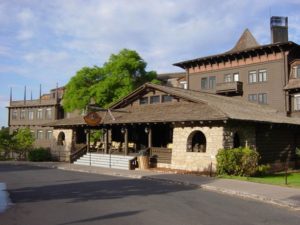 There are many ways to get into the Grand Canyon National Park.  We found one of those ways by riding from Williams to the Grand Canyon Visitor Center on the Grand Canyon Railway.  An old steam engine, converted to run on used french-fry oil, pulls a number of cars each morning up to the Grand Canyon depot, and returns that afternoon.  On the ride, there is entertainment, beverage and food service, and lots and lots of magnificent scenery.  Elks in particular are plentiful as the train nears the Grand Canyon, and parents and kids alike gleefully point out their sightings.

We wanted to go to the Grand Canyon for many reasons.  Among them, learning more about the Native American peoples who still live in this area, and who treasure the canyon and its surrounding areas as part of their creation stories.  The Tusayan Ruins, a few miles west of Desert View, show how the ancient Puebloan peoples lived over 800 years ago, though archaeologists have found traces of peoples living in the area for the past 12,000 years.

Though the South Rim is over 7000 feet in altitude (and the North Rim is over 8000 feet), the ancient Puebloan peoples were able to farm and hunt in this area, making use of the bounty provided by nature.  Yucca leaves were often woven into baskets and shoes, and deerskin was tanned for clothing.  Summer rain, combined with the Colorado River at the bottom of the mile-deep canyon, provided for their agricultural needs.

Today, the Hualapai and Havasupai peoples still live at the canyon, and the three mesas of the Hopi are nearby to the east.   The large Navajo Nation abuts the Grand Canyon National Park, and is the only part of Arizona that observes Daylight Savings Time.  So there are many different ancestral links to the Grand Canyon, and the National Parks Service has tried to preserve and help us interpret these links.  The Hopi House, reflecting the incursion of Anglo tourists to the Grand Canyon, was built in association with the Fred Harvey Company to give a stereotypical perspective of Hopi (and by association, Puebloan) history. Interestingly, the Hopi House was designed by a female architect, Mary Jane Elizabeth Colter, and constructed primarily with Hopi workers using natural local materials similar to what the Hopi built for themselves.

Another Anglo tourist feature of the Grand Canyon historic district is the El Tovar hotel, also built at about the turn of the century.  When it was finished, many considered it one of the most elegant hotels west of the Mississippi – though at the time, there may not have been many competitors for that honor!  The hotel has about a hundred rooms, and is typically fully reserved in the spring, summer, and fall seasons a year in advance.

One of the gems of this rustic hotel is the restaurant.  We had a wonderful lunch there one day – the Navajo taco and “El Tovar” chili were truly outstanding.  A word of warning – the desert tray will really cause you some difficult decision moments, as all the items are sinfully appealing.

After a leisurely repast, Michael and I strolled along the South Rim, taking in the views between the El Tovar Hotel and the Bright Angel trailhead leading down into the canyon.  The National Park Service also runs three shuttle bus routes, taking visitors to the far western portion of the South Rim, to the far eastern portion where the main parking areas and Visitor Center are located, and in-between among the various parts of the historic district.

The views of the Grand Canyon are stupendous, and it is truly amazing what Mother Nature can do with a bit of water and lots of time.  The true gem of the canyon, however, is learning about the ancestral Puebloan peoples who lived here for millennia, and how they interacted with the canyon.  When you are there, make sure that you have comfortable walking shoes, drink plenty of water, and remain aware of the high altitude.  Then you can focus more on the beauty and grandeur of the Grand Canyon, and understand why it is so revered in the stories of the ancient Puebloan peoples who settled this area.

Next up – a side-journey to Flagstaff and the Museum of Northern Arizona.