Even in May, the San Francisco mountain range remains snow-capped, giving Flagstaff a beautiful backdrop.  The high 7.000 foot altitude and crisp mountain air, laced with the scent of dense Ponderosa Pines, are quite a contrast to the more agrarian area in which we live. 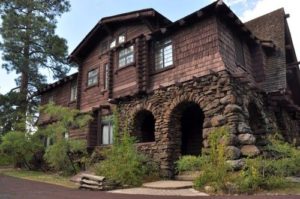 Our main purpose for visiting Flagstaff was to drop by the Museum of Northern Arizona, which has an amazing Native American exhibition, and retrieve two pieces of David Dawangyumptewa’s art, which he had been showing for several months as part of a two-artist exhibition.  We thought we might stop in on Saturday and coordinate with the museum curators, so that picking up the artwork on Tuesday would go smoothly.  As is often the case with our trips, we very fortuitously came at the same time as the Zuni Artist Market, held that weekend at the museum.

For several hours, we happily wandered through the halls of the Museum, greeting a number of our Zuni artist friends, and introducing ourselves to others we had not yet met. The Peynetsas were there, with their stunning owl pottery, and the Quams had a lovely display of their hand-carved fetishes.  For me, however, finally getting to meet Bobby Silas and talk with him about his very traditional approach to historic pottery was one of the highlights of the Museum stop.  Bobby concentrates on very complex and intricate patterns from the time of the Anasazi and Mesa Verde cliff-dwellers, capturing the elegance and symbolic meanings from the ancient peoples who preceded the current Pueblo Indians.

Though not a large metropolitan area, Flagstaff has a wealth of recreation and tourist activities.  We managed to visit the Lowell Observatory, built in 1896 and the discoverer of Pluto in 1930, Meteor Crater, and the historic and quite unique Riordan Mansion.  The Riordan Mansion, a stunning example of the emerging Arts and Crafts style, was built in 1904 by two brothers, who built two almost identical homes joined in the middle by a common living room area.  The two brothers married, raised their families in the homes, and were quite instrumental in the development of many of Flagstaff’s current amenities.  Small group guided tours are available, and we highly recommend that you spend a couple of hours exploring this amazing structure.  Not surprisingly, the architect of the Riordan Mansion is Charles Whittlesey, who also designed the Grand Canyon’s gorgeous El Tovar Hotel.

Restaurants abound in Flagstaff, many with live music, as the artist element is very prevalent in this “college-town.”  Though the population is only about 70,000, Flagstaff has quite an impressive wealth of culture.  There are many discoveries that we simply didn’t have time to pursue on this trip, like the Naval Observatory and the World Clock, nearby rock-walled pueblos at the Wupatki National Monument, Route 66 nostalgia, white water rafting, jeep tours, the nearby rugged beauty of Sedona, and many more adventures.

Our time in northern Arizona was amazing, and our explorations just managed to scratch the surface of this undiscovered part of the United States.  We returned to Texas, weary and yet exhilarated, fondly stowing away the memories of this trip and eagerly anticipating the next one.