IFAM is the Indigenous Fine Art Market, and is held in Santa Fe right before Indian Market.  We had a chance to visit IFAM’s Santa Fe show this year, in its second year of existence.  The market featured about 250 Native American artists, and was held at the Santa Fe Railyard. 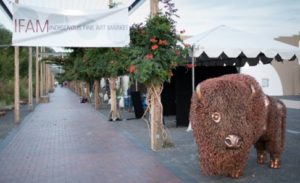 IFAM is more than just one show, however.  The organization has much the same goals as other Native American art associations – to present and honor the culture, art, and traditions of the Native American peoples.  To do this, they sponsor a number of pop-up events throughout the Southwest.

Though not as structured as SWAIA’s Indian Market, IFAM has a low-intensity and soothing quality to it.  We were fortunate to find parking at the north end of the Railyard area, and wander south among the linear layout of booths.  There were a few people we wanted to see at IFAM, including fabulous potter Stacey Carr of Laguna Pueblo, fetish carver Gabe Sice of Zuni Pueblo, and amazing photographer Deborah Lujan of Taos Pueblo.

As with Indian Market, artists can submit their works for a juried competition prior to the start of IFAM, and ribbons are awarded.  In fact, it is almost impossible to talk about IFAM without comparison to SWAIA’s Indian Market, as the structures and goals are very similar.  There are long lead times to apply to SWAIA’s Indian Market, and some artists get too busy to apply, or forget, or don’t want to spend the money on high booth fees, or for one reason or another decide to sit out Indian Market.  Some choose to go with the gentler, less crowded approach of IFAM.  The good news – the appreciation and demand for Native American art is so good that one single show like SWAIA’s Indian Market is not enough, and IFAM is filling a needed void.

IFAM is talking about a pop-up market in Tulsa in the near future – I hope to drive up and see it, and connect with old friends and maybe make a few new ones.  Tulsa has a lot more of the plains Indians influences, whereas New Mexico and Arizona have more of the Puebloan and Mesa Indians influences, so perhaps we will see additional examples of Native American art that are of interest.

If you want to learn more about IFAM, check out their website at www.idigefam.org.