We always had a nativity set at Christmas – very traditional in my family. When my mother became friends with Ivan and Rita Lewis back in the ‘70’s, she purchased a nacimiento from them – a beautiful Cochiti set.  From then on, it was always a part of our Christmas tradition as well.  Mother would set up the traditional nativity in the living room and then set up the Cochiti nacimiento in the family room with the Southwest tree.  The traditions easily blended.  Every year, my sister lovingly sets up this Cochiti nacimiento in her home, bringing back those wonderful memories. 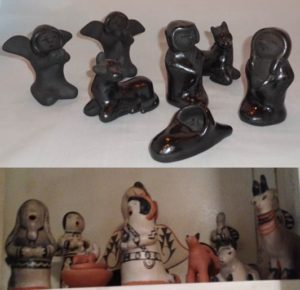 Christmas has great significance in Native American Pueblo culture, resulting from the ancient influence of Spanish missionaries. A fusion with the equally strong tradition of pottery-making, has created the delightful holiday tradition of pottery nativity sets to celebrate the birth of Jesus.

Since the 1970s, Native American nativity sets have been popular with collectors as highlights of their Christmas decorating theme. These popular folk art pottery sets feature the Christian celebration of the birth of Jesus with a decidedly Native American twist.  Often the participants in the nativity have the appearance of Native Americans, with the “chonga” bun hairstyle for women or the wrapped braids for men, wearing Indian blankets or clothing, and offering traditional Native American foods like Indian bread, small game animals, a bowl of chiles, or corn.  The animals near the manger may be those familiar to Native Americans, like deer, elk, bears, or my personal favorite, rabbits.  By making the participants more familiar to them, the Native Americans honor the Anglo nativity set, and also make the nacimiento more meaningful to their lives, a very successful blending of traditions.

Paul and Dorothy Gutierrez, husband-and-wife artists from Santa Clara Pueblo, were among the first potters at Santa Clara to create Native American nativity sets. The couple is also known for their award-winning animal figures and storytellers. They began making nativity sets in about 1970. Paul and Dorothy work as a team, with Dorothy forming the figures and Paul doing the polish and finishing work. Every step, from gathering clay to firing outside, follows traditional Santa Clara methods. “They come out different each time, with different faces. It’s nice,” Paul relates.

Today, a lovely Santa Clara nacimiento sits on my desk in the gallery to remind me of the true significance of the holiday – and the family traditions that are so important to me.  Their seven-piece set is executed in stone-polished and matte-black slip. The pieces include Mary, Joseph, Baby Jesus, two Angels, a cow, and a donkey.

Joseph’s and Mary’s faces have been minimally sculpted, yet are charmingly expressive and left matte, to contrast with the polished areas. The winsome cow and donkey are highly polished, except for the donkey’s mane. The folds of the figures’ robes are a simplified, graceful, and yet realistic detail.  The Christ Child is snugly swaddled inside the cradle board, with only the head showing, and singing robustly in praise, along with everyone else.  The combination of stone-polished and matte-finish on the various pieces is the typical look Dorothy and Paul Gutierrez are famous for creating. You can hardly resist stroking the rounded, gleaming black surfaces, they are so tactile.

I look forward to adding to my collection of nacimiento sets, displaying them throughout our home each Christmas season.  As with the Southwest Christmas tree and farolitos, the nacimientos are a visible symbol of Christmas and a natural opportunity to share traditions with our grandchildren.