The American Southwest is an incredibly beautiful part of the country.  Sweeping vistas, soaring snow-capped mountains, dense forests of trees, stark red mesas, and deep river canyons all bear witness to the power of Mother Earth and the forces of nature at work on the landscape over millions of years.  Much of the New Mexico terrain is covered in lava from volcanic eruptions, and this is also seen in the Sunset Crater in Arizona as well.  The continental drift produced mountain ranges that displaced a large inland sea, exposing dozens of layers of sedimentary rock strata that provide sharp contrasts as one views them, almost as though Mother Nature had used a wide paintbrush in horizontal strokes.  Erosion has also uncovered a number of startling treasures within the land.  The Painted Desert and Petrified Forest are vivid examples of the colorful palette that Mother Nature has used in her art. 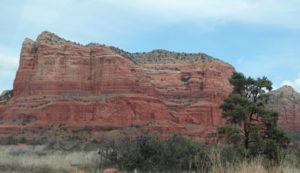 Last week, Michael and I had a chance to explore a bit of the Southwest as we drove from Dallas to Phoenix for the two day Indian Market at the Heard Museum.  As we drove mile after mile, we discussed the challenges of the ancient peoples who moved into this area tens of thousands of years ago, eventually forming communities and finding ways to coexist with the land.  The distances in the Southwest are immense, and a two hour drive in a modern automobile might have been two to three weeks of walking back then.

Much of the Southwest is more vertical than horizontal.  We spent a week driving up through Payson, where the largest stand of Ponderosa pines in the world grows, and also through Jerome, Sedona, and Flagstaff, where early settlers found old dwellings of the ancient peoples.  The National Parks Service has worked diligently to preserve the dwellings, helping us understand a bit more of how these ancient peoples lived and how they evolved into the modern day Native American peoples who live in these areas today.

On previous trips, we have been to Tuzigoot, Montezuma’s Castle, and similar Arizona sites of ancient peoples.  This trip, we made a special excursion to Chaco Canyon, an immense canyon in western New Mexico that was home to the Chacoan peoples from about 850 A.D. to about 1250 A.D.  During that time, the Chacoan peoples built a thriving network of great houses and an extensive stone highway system linking them.  Pueblo Bonito and similar structures have been reconstructed and preserved by the Smithsonian, National Geographic Society, and most recently by the National Parks Service.  Because of their highway system (two and four lane roads, up to thirty feet wide, and stretching for hundreds of miles), the Chacoan peoples were active traders throughout the region, interacting with many other peoples like the Sinagua.

When we travel through the American Southwest, we see the splendor that Mother Nature has given us.  With a little digging, we can learn about the ancient peoples who first lived here, and that helps us understand more about their cultures, beliefs, rituals, and ways of life.  In turn, that helps us understand the proud heritage of the Native Americans – both tribal affiliations like the Navajo Nation and Hopi Nation as well as the Puebloan peoples like the Zuni, Taos, and Santa Clara.  Each with a strong tradition that links back to their ancient peoples, and each shaped a little differently because of the manner in which their ancestors interacted with Mother Earth.  The stories are rich and vibrant, and over the next few weeks we will try to share more blogs of some of what we learned on this latest trip through the magnificent American Southwest.