A couple of hours north of Phoenix, and quite a ways off the Interstate, you will come across the quirky little town of Jerome.  The town is perched on the edge of a volcanic caldera, and the houses are often cantilevered out from the side of the steep mountain.  A narrow road snakes through town, with rough driveway sized side roads leading to some of the private residences. 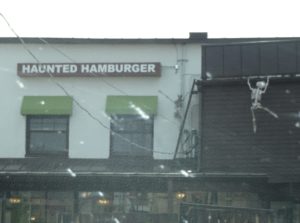 It is almost 150 years old, and owes its initial growth to a large deposit of copper that was mined a century ago.  Originally discovered by early Americans and mined for surface deposits of azurite and malachite, the copper deposits became some of the richest deposits found in the world.  Within a period of about 70 years, over 33 million tons of ore were mined.  A few miles down the road, in Clarkdale, the Copper Museum displays the history of copper and all the historic and modern uses of it.  Today, Jerome is a small community of artists, coffee shops, a few retail stores, and the Grand Hotel.

The Grand Hotel has a fascinating history, as it is an outstanding example of buildings constructed during the roaring 20’s.  Initially built as a hospital, it was closed in 1950 and subsequently reopened in 1994 as the Grand Hotel.  The manual self-service Otis Elevator was the first in Arizona, and it is a lot of fun to open the outer door, then the inner door, and enter.  Repeat the process, select one of the floors in this five story building, and reverse the process to exit the elevator.  The Asylum Restaurant on the second floor is open for lunch and dinner and has really great window views along with a superb butternut squash soup.

The Grand Hotel, and much of Jerome, has a reputation for being haunted.  Some attribute the haunting to Claude Harvey, the maintenance man who was found deceased below the elevator in 1935, allegedly murdered.  Crying babies and other apparitions are also heard and seen in the hotel, giving it a reputation among those seeking supernatural thrills.

Following the copper mine closure in the early 1950’s, Jerome subsided into a struggling, almost deserted town.  Over time, a small artist colony formed, with artists attracted to the scenic views (and unoccupied homes) in Jerome.  Today, the Jerome Historic District (almost the entire downtown area) consists of small galleries and retail shops, interspersed with a few restaurants and other service businesses.  One of our favorite places to eat is Haunted Hamburger, which goes all out to promote the haunted town image.  They have good burgers, too.

So if you are driving between Phoenix and Flagstaff and want to get off the beaten track for a bit and explore some of the history of Arizona, head to Jerome.  Drive slowly, as the roads are narrow and winding.  And you never know when you might get the urge to stop, take some pictures of the panoramic Verde Valley, marvel at the homes and garages hanging precariously out over open space, or visit with a local artist.