Chaco Canyon (and the National Parks Chaco Culture National Historic Park) is located in northwestern New Mexico.  It is a remote canyon carved out of the New Mexico plains millions of years ago by the Chaco Wash, and served as a major cultural and community center for the Chacoan Peoples over a thousand years ago.  The Chacoan peoples built over 15 large dwelling complexes in the Chaco Canyon, mostly between 950 A.D. and 1250 A.D. and established a thriving trade network extending for hundreds of miles around the canyon area.  The Chaco ruins are considered to be the ancestral homelands of the Hopi and Puebloan peoples, and are sacred to them. 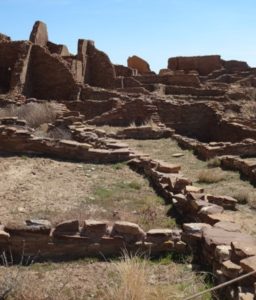 Because of their fragile nature, many of the ruins are kept in a preserved state by the National Park System and available for viewing but not climbing by tourists.

Michael and I had a chance to spend most of a day at Chaco Canyon recently, and we were completely in awe of the detailed planning and construction of these dwellings.  The National Parks System has constructed an educational Visitor Center, and put a counter-clockwise loop road through the canyon, allowing visitors to get up close and personal with the pueblos.  There are informative maps and guides available, describing the structures and archaeologist speculation as to their uses.  At each stop, there is parking, and even restroom facilities at a couple.  Be aware that Chaco Canyon is over 6200 feet in altitude, so stay well hydrated and watch out for heat exhaustion.

The central feature of Chaco Canyon is Chaco Wash, flowing through the canyon and actually carving out the canyon over hundreds of thousands of years.  The wash formed the wide, flat canyon floor and further provided a meager source of water for the Chacoan Peoples when they settled in the area.

But the history of Chaco Canyon goes back further than the Chacoan Peoples who arrived a thousand or so years ago.  The first settlers were the Clovis big-game hunters, meandering through the area over 10,000 years ago.  After many thousands of years, the Ancient Puebloans (the Anasazi people in Navajo terms) settled and began the construction of the first pueblos, using the stone from the mesa walls and timber from mountains over 50 miles away.  Pueblo Bonito, the largest and most well-preserved of the dwellings is constructed in typical Chaco fashion with a half-moon shaped set of residential dwellings facing a courtyard and ceremonial kiva in the courtyard. Pueblo Bonito, with its approximately 50 residential rooms, could support a population of several hundred people.

All the fifteen major pueblos in Chaco Canyon were constructed to align with solar and lunar cycles, and each maintained a direct line of sight visibility with its neighbors.  Chaco Canyon emerged as a major trading area throughout the Southwest, as well as a major center for spiritual and religious activity.  To facilitate travel, the Chacoan Peoples built massive roads, arrow straight regardless of obstacles like mesas (they carved steps into the mesas to climb up and down) and wide enough for two lanes of traffic to pass.  The road network was labor intensive to build and maintain, and to this day is a marvel of ingenuity and creativity among the Native American construction activities.

Speculation is that a major 50 year drought forced the Chacoan Peoples to abandon their valley, spreading to the southeast and southwest in search of stable water sources.  They were succeeded in this area by the Apache and Navajo, and many Navajo live in the area to this day, though the formal Navajo Nation lies to the west.  The entire Chaco Canyon site has been deemed a UNESCO World Heritage Site, comprising the largest concentration of pueblo dwellings in the American Southwest.

The story of Chaco Canyon, and the Chacoan Peoples, is a rich chapter in the story of the American Southwest.  Many artifacts from Chaco Canyon were removed in the early part of the 20th century and taken to Washington D.C. for exhibition, and are now in the process of being returned to the Chaco Canyon where they can provide in situ testament to the lives of these peoples.  The National Park Service continues to work with Native American groups to preserve the knowledge while remaining respectful of the sacred nature of this site to Native Americans.  Chaco Canyon contains many of the roots from which today’s Native Americans in the Southwest have come, and has tremendous importance for that reason.