The Pacific Rim (land masses surrounding the Pacific Ocean) includes the Pacific countires of America, western Mexico, western South America, and across to Japan, China, Indonesia, and so on.  The Pacific Rim is noted for frequent volcanic eruptions, as seen in the Mount St. Helens eruption in Washington State, current eruptions in Alaska and Hawaii, and others on a frequent basis throughout the Pacific Rim countries.  However, we rarely think about volcanoes as part of the American Southwest landscape. 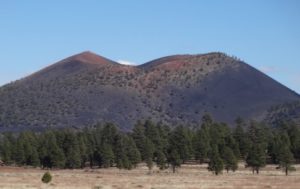 In March, as Michael and I returned home from the Heard Museum Indian Market in Phoenix, we had a chance to stop at the Sunset Crater volcano to the northwest of Flagstaff.  We were surprised to read that this volcano had erupted less than a thousand years ago (1064-1065 A.D.), while the area was inhabited by Native Americans.  As we drove up to the crater overlook, we saw fields of lava with grasses and trees trying to find cracks in which to plant roots and take hold.  As this is a National Park Service site, stopping at the side of the road and taking lava rock souvenirs is not permitted.  However, we have often noticed the prevalence of lava throughout Arizona, Utah, Colorado, and New Mexico, often coming up to the side of the road.  In fact, Interstate 40 across New Mexico cuts through an extensive lava field for quite a few miles.

We noted this abundance of volcanoes in an earlier blog, with a trip up to the Jemez Pueblo and through the Valles Caldera, a super-volcano.  Recently, we did some additional investigation, and found that there are over 1400 volcanoes in the American Southwest, excluding the Pacific states of California, Oregon, and Washington State.  These include the San Francisco Peaks outside Flagstaff, Steamboat Springs in Nevada, the Zuni-Bandera field in southwestern New Mexico, and Dotsero volcano in Colorado.  Each of these four is relatively close to a population area, but only Steamboat Springs is seen as a high threat for eruption.  Most of the 1400 volcanoes, like the Valles Caldera super-volcano, are viewed as dormant or very low risk of eruption.

As we drove through the Colorado Plateau, often among the Navajo Nations lands, we noted a lot of tall cinder cones dotting the land.  The near-term threat of volcanic eruption is most likely from these types of cones, similar to the Sunset Volcano crater eruption, which would probably only impact an area of a couple hundred square miles around the eruption site.  Fortunately, the U.S. Geological Survey has established a seismic monitoring network throughout the American Southwest and is tracking potential eruptions.

Early Americans recognized the lethal power inherent in volcanic eruptions.  But they also recognized that the lava fields could be beneficial in many ways as well.  Sharp pieces could be used to skin animal hides, or become ax heads for chopping timber and plants.  Pulverized lava could be used as pigment on pots.   Pointed pieces might even be used as knives or arrowheads for hunting.  And when a volcano began to erupt, they wisely relocated to safer lands.

The land is alive beneath us.  Often, it moves in long time cycles that are beyond our conscious recognition, such as the millions of years of uplifting the Rocky Mountain range, or the millions of years of carving out the Grand Canyon.  Sometimes, however, the land moves quickly and explosively, letting the heated magma bubble up from below to spew out on the land.  The land has massive strength, often subtle, and sometimes violent.  As humans, we are only on the land for a short time, a mere instant in geological terms, and we are of the land.  We should be wise stewards and caretakers of the land, carefully using the resources and bounty that it provides, and preserving the beauty of the land for future generations.  Learning more about the land is but one small step in this long journey.