Earlier this year, the Indian Pueblo Cultural Center (IPCC) in Albuquerque opened a large, modern Starbucks across the street from their facility. It is a great place to stop for coffee or a sandwich, and Michael and I have added it to our “go-to” stops while in Albuquerque. Of course, this is typically after I have downed an order of my favorite blue corn onion rings from the Harvest Café at IPCC. 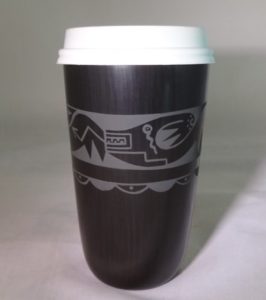 I’ve written about IPCC before – how it was founded 40 years ago by the 19 New Mexico Pueblos, working together to showcase the culture and art of their peoples. In addition to the magnificent museum displays, they have an amazing museum shop (far too classy to call it a gift shop), frequent cultural exhibitions and dances, and significant presentations and meetings on topics relevant to Native Americans and other residents of the American Southwest. It is an absolute “always stop here” when we go through New Mexico, and I am really pleased with our memberships.

So, as they always do, the creative people at IPCC decided to do something both symbolic and fun with the opening of their new Starbucks. They went to a few noted Native American artists, including my friend Erik Fender, and asked them to create something which tied together the rich heritage of the Native Americans and the new coffee hangout. Erik came up with a tall coffee cup similar to a venti beverage cup, only in San Ildefonso black pottery and engraved with Native American symbols.

Erik says that the first try wasn’t successful, as the pottery cracked during firing, and he had to try again. The next cup was successful, yet just a bit too large for the Starbucks plastic coffee lid. So he put that cup in the Than Povi store at the San Ildefonso pueblo, and tried yet a third time. The third time was the charm for Erik, as this effort produced just the right size cup for the Starbucks lid. This third cup is on display at the Starbucks store in Albuquerque, highlighting the elegant combination of traditional Native American pottery expertise with the Native American artwork throughout the store. There is some talk that the third cup may be the model for some replicas, and I think if Starbucks was smart they would jump all over that one.

So what happened to the second cup that Erik made, the one that was successfully fired but not quite the right size? Yes, you are right! I managed to add that unique, one-of-a-kind creation by Erik Fender to my gallery, together with the silly white plastic Starbucks lid! No, we will never use it for any beverages – this precious piece of pottery is far too significant for that. It is a piece of pottery that is unusual, but also one with a great story behind it. Every time I look at it, I think of Erik’s smile, of the lid that didn’t quite fit (lucky for me that it didn’t!), and the smart and creative folks running IPCC.

In a nutshell, that is the excitement and pleasure I have in learning the stories behind the magnificent art produced by the Native American artists of the American Southwest. While one can appreciate the beauty of the pottery, jewelry, carvings, paintings, textiles, and baskets, the story behind the art is the real treasure. That is what art is to me – the people, their lives and labors, their cultural influences, all providing rich context to the art that they create. It is all about the story.