I am writing this today on Red Nose Day, which is targeted at helping end hunger among children around the world.  It is a meaningful effort, and one that Michael and I have supported with our own red noses. 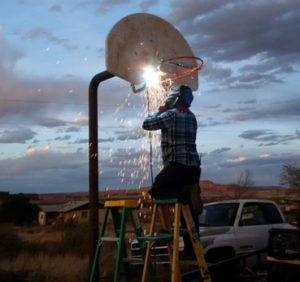 But today is just one day.  There are 364 more of them out there each year, and so many ways in which we can all make a difference.  This blog is to celebrate the actions of several Native American artists who, in their own ways, make a big difference in the world.  And I am very happy to have these people of action as my friends, partly because they are talented artists, but also because their hearts are so wonderful.

The first is Stacey Carr of Laguna Pueblo.  Stacey is a talented potter who grew up in Old Laguna, and his roots run very deep in the community.  Earlier this year, Stacey noticed that the basketball courts where he had played many years ago had fallen into disrepair, and he took action.  Stacey organized a group of people who cleared off the debris and overgrowth from the courts, fixing items that were broken, and bringing this neglected facility back to life.  He did it not for money or recognition, but because it was an important task to do for the children of the pueblo.

The next is a cluster of artists – Maxine and Dominique Toya of Jemez Pueblo, Nancy Youngblood of Santa Clara Pueblo, and other family members – who spend countless hours traveling the country to demonstrate traditional Native American pottery skills.  In doing so, they communicate far more than just their skills and techniques.  They communicate their values, their culture, and help educate people about the stories of the Native Americans who form such an important piece of our heritage.  Seeing the art through the eyes of the artist, and hearing the stories from the souls of the artists, makes this art more understandable and approachable.  Their public service is invaluable.

And then there is Jeff Shetima of Zuni Pueblo.  There is a thriving community of fetish carvers and sculptors at Zuni, but it has been fragmented and underpublicized in the past.  Jeff has taken a strong role in organizing Zuni Main Street Festival, a celebration and juried competition among Zuni carvers, and has worked tirelessly to help other carvers become better businesspeople to help showcase their spectacular talents.

Each of these artists does many other things as well.  Some are active in SWAIA, the organizing group for the highly acclaimed Santa Fe Indian Market each August.  Others work closely with their Pueblo governing and religious organizations.  Some donate pieces of their art to auctions and fund-raisers for their communities.  But what helps to set these very talented artists apart is that they are dedicating a part of their valuable time to helping others.  They take the time, they make the effort, and they work to help others because it is the right thing to do.  At the end of the day, actions speak far more than words, and these people of action quietly deliver.

I guess that makes me a member of their fan clubs.  I know how hard it is to create magnificent pieces of art, to raise families, and to handle the daily grind of life.  That these wonderful people make the time and effort to help others in the ways they do just leaves me in awe and heartfelt appreciation.

Artists are far more than just their art.  The more that I am among them, in their homes and studios, hearing their stories, sharing meals with them, and just hanging out, the more that I see the depth of their creativity and fall in love with their works.