Water.  I sit here this morning watching another dreary day of scudding clouds and seemingly endless rain.  This is the second spring in a row that Texas has had enormous amounts of rain, followed by flooding and tragedy. 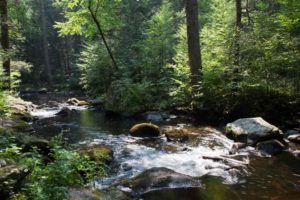 Water is a good thing.  It is necessary for our survival.  The surface of Mother Earth is over three-quarters covered by water, and our own bodies are more than sixty percent water.  Without water, we do not live long.

But even as plentiful as water is on Mother Earth, it is mostly laden with salt.  Only the fresh water that falls from the skies is useable by us.  It falls as snow or rain, it collects in lakes and rivers, and then heads back into the vast oceans from where it originated.

As such, fresh water can be unpredictable.  The low pressure system currently sitting over Texas has caused torrential rains and flash flooding, yet areas in California are still in long droughts.  Rain falls where it wants, and when it wants.  This is the natural cycle that has given life to the land, but on its own terms.

Thousands of years ago, as the First Americans began to move throughout the Southwest and form settlements, they recognized the sometimes erratic nature of fresh water.  Rivers would flow, and the First Americans would plant crops and irrigate.  Lakes would have teeming stocks of fish, and land animals would frequently travel to rivers and lakes for a drink of fresh water and sometimes an afternoon snack.

Sometimes, the heavens would pour water from the clouds, and parched desert canyons would turn in to raging floodwaters in almost a moment’s notice.  At other times, the rivers would stop flowing and lakes would begin to dry up.  These shifts in climate patterns forced the First Americans to abandon their settlements, like Casa Grande, Bandelier, and Chaco Canyon, and migrate to areas where fresh water was more abundant.

This dynamic interaction of the First Americans and Mother Earth was a basis for the formation of their beliefs, attitudes, religions, and cultural practices.  Every morning, my friend Samuel Manymules, a Navajo potter, greets the morning with blessings and thanks to Mother Earth.  Michael and I were recently honored by being asked to attend a sacred evening dance at a New Mexico Pueblo, at which the dancers – elegantly attired in traditional dance attire – paid tribute to the brave Comanche tribe with which they have interacted over the centuries.  Often, at events like the Phoenix Heard Museum Indian Market or the Santa Fe Indian Market, Native American dancers perform ceremonial dances for throngs of appreciative visitors.  Even better, they explain to Anglos some of the culture and significance of their dances.

The interaction of Native Americans with water, and with the other richness provided by Mother Earth, is both spiritually touching and increasingly relevant to all of us.  The lessons of water and other natural resource conservation, learned through thousands of years of trial and error by the Native Americans, are important lessons for all of us to learn.  The typical Anglo approach to Mother Earth is to force the land to do our bidding, as we foolishly think that we can control the environment.  But as resources dwindle and the population increases, we are starting to realize that we can’t continue down this path of endless, mindless consumption.  The Native Americans have lessons for us to learn.  It is up to us to listen carefully and live in more harmony with the blessings of Mother Earth.