In our first book, my brother Jamie, wrote a touching story of the day that he met Charlie Eagle Plume, and how that had a lasting impact on his life.  Earlier this year, Michael and I had a chance to go back to the Eagle Plume Trading Post in Allenspark, Colorado and retrace some steps. 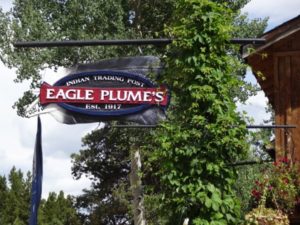 Charlie was born Charles Burkhardt in 1908, graduated from The University of Colorado in 1932 and served in the US Army in World War II in the South Pacific.  Charlie had a lifelong love of Native American arts, and amassed quite a collection of authentic artwork.

Eagle Plume’s Trading Post was established in 1917, and today is a combination of museum pieces and art for the tourist or collector.  Initially started as an inn, the owners continued collecting Native American beadwork and other arts, eventually migrating the store to completely Native American art.

While working on his education at The University of Colorado, Charlie spent summers working at the store. This led to a passion for Native American culture, and he began touring and lecturing around the United States.  A champion of civil rights, Charlie spent a lot of energy trying to build bridges between Anglo and Native American cultures.  As a result, there has been a lot written about Charlie and his life, and his legacy continues through the efforts of his family.

While visiting Eagle Plume’s earlier this year, we had a chance to talk with Charlie’s adopted daughter of the Northern Cheyenne, Ann Strange Owl-Raben.  She told us a lot of wonderful stories while we were there, including the one about her great-grandmother escaping the horrific Sand Creek massacre in 1864 with four bullet wounds and Ann’s then-infant grandfather in her arms.  Part of the Northern Cheyenne Nation, Ann proudly recounts her heritage to interested visitors.  A book is currently being written about Ann and her life, and we are eagerly waiting for its publication so we can learn even more.

Ann’s husband Dayton Raben is a Native American art expert, and he readily identifies authentic jewelry and natural turquoise for buyers.  Ask for some stories, and I am sure Dayton will be happy to oblige.

So if you are up around Estes Park, northwest of Denver and at the entry to the Rocky Mountain National Park, stop by Eagle Plume’s and visit with them for a while.  They have lots of Navajo rugs, quite a few pots and pieces of jewelry, and even a bin of arrowheads for young children.  Charlie made a habit of handing out arrowheads or small feathers to children when they came to visit, and this charming tradition continues today.

When you are on the road to Eagle Plume’s Trading Post, you might be heading north on Colorado Highway 7.  Right before you get to Eagle Plume’s Trading Post, you will notice a Chapel on a rock on the left side of the road.  Try hard to stay on the road and carefully pull into the parking area – not that I am saying my husband did anything other than that, of course.  The Chapel is St. Catherine of Siena, and holds 80-100 people at one time.  The Chapel is stunning, sitting on a large rock outcropping and very visible from the road.  Inside, it is a very traditional Catholic chapel, and is beautifully maintained.  The Chapel is part of the St. Malo Retreat Center, which is recovering from recent fires, but is well on the way to full operation in the near future.  Definitely worth a stop and some pictures in the amazing setting of the Rocky Mountains.