Santa Fe has been around for a long time, though it gained a greater prominence when Spanish Conquistadors arrived in approximately 1540 and established a regional governmental presence.  Today, Santa Fe serves as the State Capitol of New Mexico, though for the past hundred years it has also produced a vibrant artist movement. 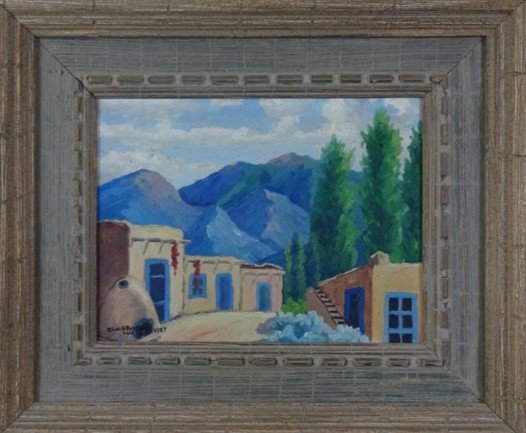 In many cases, the artists happened upon Santa Fe or other parts of New Mexico in their explorations of the American Southwest.  The story of the White sisters is somewhat typical.  While driving through New Mexico on their way to California, these two wealthy New York socialites stopped in Santa Fe and never left.  They bought a large eight-acre tract of land northeast of the struggling downtown area, and built a number of structures on the property.  They named the compound “El Delirio,” which translates to The Madness from Spanish to English.  Their home became a center for lavish Santa Fe parties, but the White sisters also spent significant time and countless dollars establishing museums and art associations in the Santa Fe area, celebrating the artistic skills of Native Americans.  The Wheelwright Museum is one example, a world class museum in the Museum Hill area, a few miles south of the White Sisters compound.

To a large degree, the history of Santa Fe would be quite lacking without the contributions of the White Sisters.  Though Martha passed away at a fairly young age, her sister Elizabeth would carry on by forming the Santa Fe Animal Shelter, the Indian Arts Fund (which evolved into the current day School for Advanced Research), and developing large tracts of land for businesses and residential uses.  When Elizabeth passed away in 1972 at the age of 96, she donated her residential compound to SAR, where it currently houses the massive collection of Native American works.  The White Sisters mausoleum remains on the grounds, as does the lovingly tended cemetery for their Irish wolfhounds.

Another traveler with a similar story is Georgia O’Keefe, who visited New Mexico beginning 1929 and fell in love with the vibrant landscapes.  She continued her career as a successful painter, returning often on vacation and finally purchasing a home in Abiquiu.  In 1945, she purchased a second home near Abiquiu and moved there permanently following the passing of her husband in 1946.  After her move, she focused on New Mexico landscapes rather than the cityscapes and abstract art of her early years.  O’Keefe attracted other artists to New Mexico, including photographer Todd Webb, potter Juan Hamilton, photographer Ansel Adams, songwriter Joni Mitchell, and others.  Following her passing in 1986 at the age of 98, O’Keefe’s cremated remains were scattered around the grounds of her beloved Ghost Ranch outside Abiquiu.

During her time in New Mexico, O’Keefe was known for camping in the hills of the Southwest, gaining inspiration from the natural beauty and translating that into gorgeous works of art.  Her spunky nature drove her to an independent style of painting, not conforming to the current trends, but instead finding her own voice as she painted.

Santa Fe was also home to a small group of oil painters, known as The Santa Fe Art Colony.  Starting around the end of the 19th century, several highly-regarded Eastern painters began to relocate to Taos and Santa Fe, recognizing the rich grandeur of the area as prime candidates for their artistic talent.  The Museum of New Mexico supported these early efforts trying to offset the steep decline in tourism caused by the railroad bypassing Santa Fe. A group of local businessmen, headed by Edgar Lee Hewitt and Frank Springer, believed that the culture of Santa Fe and the Native American heritage would blend well with an infusion of Anglo artists, so they began work on revitalizing Santa Fe with this intent.  The New Mexico Territory government donated the Palace of the Governor’s building to their efforts, which at the time was unused and in significant disrepair.  They also worked with local governmental bodies to preserve and codify the distinctive Santa Fe architecture in commercial and residential structures.

These businessmen also worked hard to attract more well-known Eastern artists.  Among the first ones were Carlos Vierra and Warren Rollins, followed by Sheldon Parsons, Paul Burlin, and Gerald Cassidy.  The Santa Fe Art Colony was well founded.  Artists continued to stream in as the reputation of the Santa Fe Art Colony expanded, and this sleepy little town of 7,000 rapidly gained an international reputation.   As the artists created works, they, and enterprising business people, began to showcase these works, and the works of Native American artists in art galleries.  Not surprisingly, that was the genesis of what we now know as the Canyon Road District.

I am happy to have a couple of original oil paintings by Charles H. Reynolds in my Gallery, handed down to me by my mother.  Though a latecomer to the original Santa Fe Art Colony, his paintings of the New Mexico landscapes, buildings, and peoples are typical of the works done by these spectacular artists.  Though not Native American, these artists of the Santa Fe Art Colony are an integral part of the cultural tapestry of New Mexico, and their efforts aided in preserving the stories and art of the Native American artists with whom they coexisted.  The history of New Mexico and its peoples has many chapters, and carefully exploring each chapter leads one to a much richer understanding of this amazing culture.