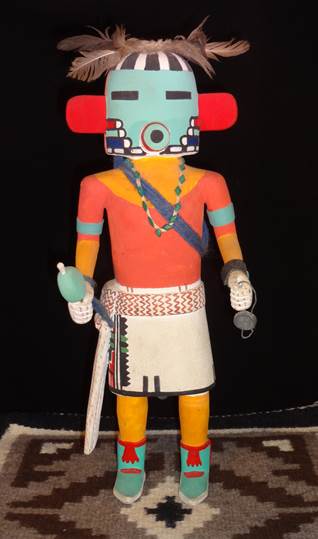 One of the most fascinating collections of katsinas that I have ever seen is that of Roger Thomas and his late wife Elaine.  The historic Inn of Halona in the heart of the Zuni Pueblo has a large meeting room, just filled with hundreds of magnificent katsinas collected by Roger and Elaine over many decades.  It is worth staying at the Inn of Halona just to get to know Roger, learn about the Zuni Pueblo, and see this incredible, museum-quality collection.

Kachinas (also known as katsinas) are seen as spirits or personifications of things in the real world.  They are typically found in the Western Pueblo cultures, including the Hopi, Tewa, Zuni, Acoma, and Laguna.   The most prominent are those of the Hopi people.  The Navajo also have kachinas, and are not true kachinas, but are made for the tourist trade instead of religious training or ceremonies.

Hopi katsina dolls, called tihu in the Hopi language, are carved representations of the Katsinam, the spirits essences of ancestors, plants, animals, clouds, and, indeed, everything in the Hopi universe.  It is said that the Hopi recognize over 200 traditional katsinas, with many more styles created beginning in the last half of the nineteenth century.  Although not worshipped, each is viewed as a powerful being who, if given veneration and respect, can use his particular power for human good, bringing rainfall, healing, fertility, or protection.  These spirits are believed to visit the Hopi villages during the first half of the year. Hopi katsina dolls hold tremendous spiritual and cultural significance.

The flat katsinas are carved by uncles from the root of the cottonwood tree and traditionally given to young girls by the Katsinam at the time of the ceremonial Bean Dance (Powamuya) in February and the Home Dance (Niman) in late July.  When katsina dolls are presented, they are given as prayer gifts for the girl to grow, be happy, strong, and healthy, to have a long life, and in turn, have children of her own.

These katsinas are given to children not as toys, but as objects to be treasured and studied so that the young Hopis may become familiar with the appearance of the katsinas as part of their religious training.  During Katsina ceremonies, each child receives their own figurine.  The figurines are then taken home and hung up on the walls or from the rafters of the house, so that they can be constantly seen by the children.  The purpose of this is to help the children learn to know what the different katsinas look like.

In earlier days, all katsina dolls were colored with natural dyes, which made them non-toxic for a teething baby to handle. The dolls created by Native Americans for the tourist market, however, sport modern dyes and paints along with essential elements missing so as not to make them exact replicas of the true kachina personifications.

Kachina or katsina? Many people are confused by the different spellings of “kachina”. Kachina is the English form of the word. The Hopi language does not have the “ch” sound and the proper Hopi pronunciation, and spelling, is “katsina”. Tihu is the Hopi word for a  katsina doll; tithu is the plural.

Adapted from information from The Museum of Northern Arizona and The Heard Museum.