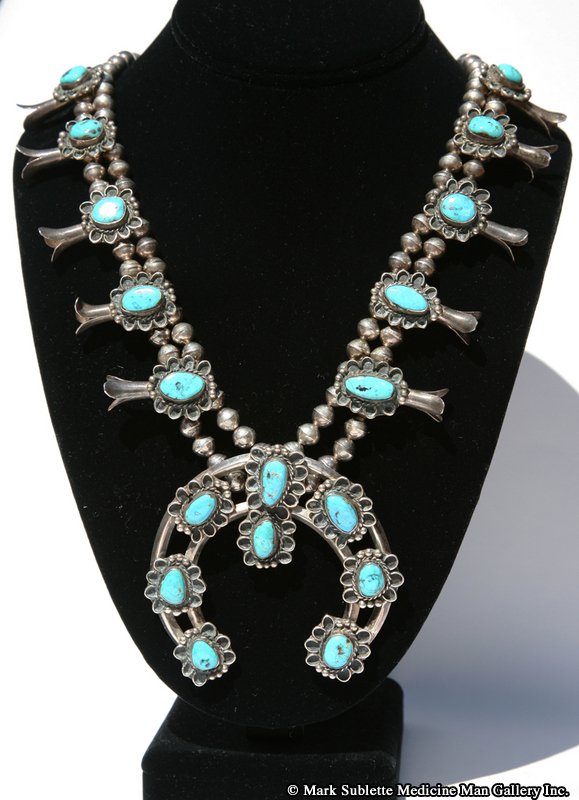 Native American Indians have been wearing and making jewelry for personal adornment long before the first Europeans reached North America. Southwest Native American jewelry made with silver began with the introduction of European metal-working. Before this time, jewelry was made with natural resources, such as turquoise, shells, stones, wood and bones. Before this period, jewelry was not considered as art, but more as functional and personal dress such as buttons, buckles, broaches and bridles. For many people, their jewelry also served as their bank—a way to trade or barter for items needed by the family. As Indian tribes were resettled by Europeans, craft work and jewelry making became an important means for economic survival.

As people started buying and collecting Native American jewelry it became popular starting in the 1960s to have the silversmiths or artists sign or “hallmark” their work. Most of the pieces of jewelry made before the 1960s are not signed or hallmarked, and the artist remains unknown. The most well-known jewelry makers of today are the artists from the Navajo, the pueblos of Zuni, Hopi, and Santo Domingo.

The Zuni Indian reservation is along the western of New Mexico near the border of Arizona. The Zuni Indians and their ancestors have been making jewelry for over 1,000 years. It is reported that the first Zuni Indian to learn to work with silver was Lanyade around 1872; he learned his craft from the Navajo.  Many of the designs of Zuni Indian jewelry have not changed over the years.  Zuni Indians are known for their intricate stone cutting: petit point, needle point, inlay and detailed stone carvings known as fetishes.

Needle point -Turquoise cut in long narrow or elongated stones set in delicate bezels is called needle point. This is a skill of intricate small stonework especially with pieces with smaller tightly fitting gems and settings.

Petit point – Turquoise or small stones are cut into egg-shape, oval or pear-shape gems set clusters or rows with stones and settings symmetrical.

Inlay – This technique predates European arrival and involves small stones or shell cut and set into channels of silver. The inlay can be flat, raised, etched or sculpted.

The largest southwest Native American Indian reservation and the nation’s largest tribe is that of the Navajo. Their reservation is in Northern Arizona, New Mexico and southwestern Utah. Navajo Indian jewelry is probably the most well- known style of Native American jewelry. The Navajos learned to cast silver in sandstone or tufa, as well as produce hand-hammered work. Turquoise, a traditional favorite of the Navajos, was first included with silver jewelry during the late 1800s. Navajo Indian jewelry is traditionally is made with silver leaves, flowers, beads and hand stamp work. The popular Navajo jewelry styles include sandcast jewelry, naja pendants, squash blossom necklaces, silver beads and Concho belts. Today, the Navajo create with not only turquoise, but a variety of other gemstones as well.

The Hopi Indians, or the “Peaceful Ones”, trace their ancestry back to the Anasazi, who were the prehistoric inhabitants of the Four Corners area. The Hopi nation totals approximately 8,500 and is surrounded by the Navajo reservation in northeastern Arizona. Their traditional homeland is located on three remote mesas. Early Hopi Indian jewelry was made from turquoise, stones, shell, wood and seeds. Hopi Indian men learned the art of jewelry making in the early 1900’s. By the 1930’s a distinctive style, known today as “overlay”, emerged and became quite popular. In the creation of overlay jewelry, two sheets of silver are soldered together after cutting out designs in the top layer with the under layer visible. This under layer has been oxidized for contrast and textured with chisel marks or stamp work. A matte or satin finish is usually given to their silver jewelry using steel wool. Typically, no stones are used, but the Hopi Indians do make turquoise jewelry, as well. The Hopi Indians are also known for their baskets, and Katsina or Kachina carvings.

The Santo Domingo Indians are one of the eighteen modern day Rio Grande pueblo people that are descendants of the ancient Anasazi. Their reservation is located between Santé Fe and Albuquerque, New Mexico, along the Rio Grande River. The Santo Domingo Indians create silver, shell and turquoise jewelry. Traditionally, jewelry makers at Santo Domingo are best known for their beautiful heishi. Heishi is made by grinding, drilling and stringing rolled turquoise and/or shell beads into necklaces similar to those of their ancestors. Signature jewelry pieces of the tribe are not only beautiful heishe strands, but thunderbird necklaces and mosaic inlay on shell or bone