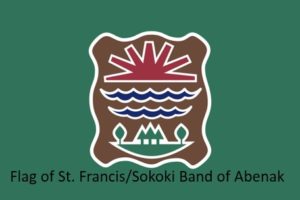 Previously villages consisted of small birchbark buildings, called wigwams or lodges, and were about the size of a modern camp tent. Some Abenaki families preferred to build larger Iroquois-style longhouses instead. An Abenaki village contained many wigwams or longhouses, a meeting hall, and a sweat lodge. Many villages also had palisades (high log walls) around them to guard against attack. The Abenaki tribe was well-known for their birchbark canoes and their quillwork, beadwork and black ash baskets.

Official recognition by the US is important to the Abenaki tribe. They do not have hunting or fishing rights; they cannot sell arts and crafts under Indian craft laws; and other American Indians don’t always recognize or cooperate with them. The Abenaki want to be recognized as a true Indian tribe, but because their ancestors often hid from the Americans or fled into Canada, they cannot prove that they lived in New England continuously since the 1600’s.