Acoma, which means People of the White Rock, has been inhabited since before the twelfth century.  The Acoma Pueblo, also known as Sky City, is about 50 miles west of Albuquerque. It sits atop a 357-foot mesa that was inaccessible to enemy raids for centuries, because there was only one way up through a narrow stairway using handholds. Today, there is a paved road to the top. That is the only modern day convenience; however, as there are no running water, electricity, or telephone lines. The 300 or so structures on the mesa are passed on from mother to daughter and ‘owned’ by the women.  Although not all Acoma live on the mesa year-round, a good portion return to the mesa often. Most of the present day people have residences in other parts of the reservation or in several farming villages, but at no time is the Pueblo on the mesa without several families living in the old houses and caring for the Franciscan mission church of San Estevan, established in 1629. The mission and the entire Pueblo is a National Historical Landmark. 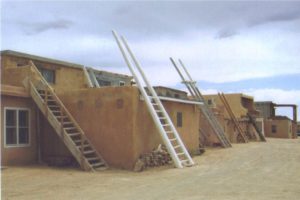 It is interesting to note that every Acoma pot has an old pot incorporated into it with potters using old pot shards and grinding them up to use as temper for a new pot. Each new Acoma pot contains a little bit of history. This mixing of the old and new clay results in very thin, lightweight, yet strong pottery. Traditional designs range from complex geometrics to abstract animal, floral and figurative forms. Acoma Pueblo artists are known for their intricate fine black-line rain pots.