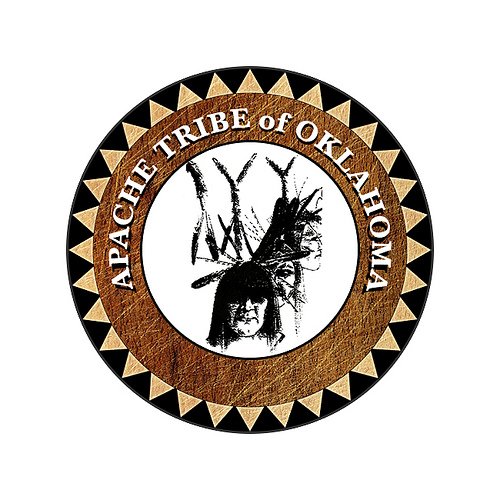 Apache (pronounced uh-PAH-chee), means “enemy” in the language of their Zuni neighbors. The Apaches’ own name for themselves was traditionally Nde or Ndee (which means “the people”), but today most Apache people use the word “Apache” themselves, even when they are speaking their own language.

The Apache are natives of the Southwest deserts (particularly in Arizona, New Mexico, and Texas). Some Apache people were also located across the border in northern Mexico. One Apache band, the Na’ishan or Plains Apache, lived far away from the other Apaches, in what is now Oklahoma. Their customs were different from other Apaches, more similar to their Kiowa neighbors. For that reason, the Americans often called the Na’ishan “Kiowa-Apaches.”  The Plains Apaches are still living in Oklahoma today. Some Apaches from other bands were captured and sent to live in Oklahoma by the Americans in the 1800’s, while other Apaches resisted being moved and remain in Arizona and New Mexico today. The total Apache Indian population today is around 30,000. There are thirteen different Apache tribes in the United States today: five in Arizona, five in New Mexico, and three in Oklahoma. Each Arizona and New Mexico Apache tribe lives on its own reservation. Reservations are lands that belong to Indian tribes and are under their control. The Oklahoma Apaches live on trust land. Each Apache tribe has its own government, laws, police, and services, just like a small country. However, the Apaches are also US citizens and obey American law.

In the past, each Apache band was led by its own chief, who was chosen by a tribal council. Most important decisions were made by the council, and all the Apache councilmembers had to agree before an action could be taken. An Apache chief was more like a tribal chairman than a president. Most of his job was mediating between other Apaches. Most Apache tribes still use tribal councils for their government today.

Almost all Apache people speak English today, but many Apaches also speak their native Apache language, which is closely related to Navajo. Apache is a complex language with tones and many different vowel sounds. Most English speakers find it very difficult to pronounce.

Apache women were in charge of the home taking care of children and the cooking. The women built new houses for their families every time the tribe moved. The Apache people lived in wickiups, which are simple wooden frames covered by a matting of brush and sometimes a buffalo-hide tarp. Wickiups were small dwellings, often the size of a modern camp tent, and an Apache woman could build a new wickiup in two hours if there was enough brush available. The Plains Apaches and some Lipan Apaches used buffalo-hide tipis as housing instead, which are more spacious and easier to heat than wickiups. Though it was rare for an Apache woman to become a warrior, girls learned to ride and shoot just like the boys did, and women often helped to defend Apache villages when they were attacked. Apache men were hunters, warriors, and political leaders. Only men were chiefs in the Apache tribe, although both genders took part in storytelling, artwork and music, and traditional medicine.  Apache artists are famous for their fine beadwork and basketry.

Originally Apache women wore buckskin dresses and the men wore leather war shirts and breechcloths. In the 1800’s, many Apache men began to wear white cotton tunics and pants, which they adopted from the Mexicans and many Apache women, wore calico skirts and dresses. The Apaches wore moccasins or high moccasin boots on their feet. An Apache lady’s dress or warrior’s shirt was often fringed and beaded for decoration. The Apaches did not traditionally wear feather war bonnets, but the Plains Apaches adopted these headdresses from their Kiowa allies. Other Apache people wore leather or cloth headbands instead. Women usually wore their hair long and loose or gathered into a bun. Many young Apache women fastened their buns with hourglass-shaped hair ornaments called nah-leens.  Apache men often cut their hair to shoulder length (except in the Plains Apache tribe.) Both sexes liked to wear shell jewelry, especially choker-style necklaces. The Apaches also painted their faces for special occasions. They used different patterns for war paint, religious ceremonies, and festive decoration.

The Apaches traded regularly with other tribes of the Southwest. They particularly liked to trade for corn from agricultural tribes like the Navajo and Pueblo tribes. More often, though, the Apaches were known for raiding neighboring tribes and stealing horses, corn, and other goods. The Apaches had different ideas about war than Europeans did. The Europeans considered a direct attack honorable but thought sneaking in and stealing things was cowardly. But to the Apaches, stealthily raiding another tribe’s camp was a brave deed because it meant risking their own lives, but attacking the camp openly would be shameful, because children and old people were likely to be hurt. Apache warriors usually only fought real wars over matters of revenge or defending their lands from invaders, such as the Mexicans and Americans. At other times, Apache men went on raids primarily to prove their courage.