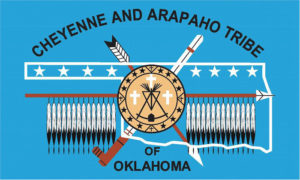 Arapaho (pronounced “Uh-RAH-puh-hoe)” may be a corruption of the Pawnee word for ‘traders.’ The Arapahos call themselves Hinono-eino or Inuna-ina, which means “our people,” but today they also use the word Arapaho (sometimes spelled Arapahoe.)  The Arapahos were far-ranging people, especially once they acquired horses. By the time the Americans met them they were living on the Great Plains in what is now Colorado, Wyoming, Nebraska and Kansas. Eventually the US government deported the Southern Arapaho tribe to Oklahoma, where they joined together with the Cheyenne. The Northern Arapaho tribe remains in Wyoming today.

There are two Arapaho tribes today: the Northern Arapahos live on a reservation, which they share with the Shoshone; and the Southern Arapahos live on trust land together with the Southern Cheyennes. Each Arapaho tribe has its own government, laws, police, and services, just like a small country. However, since they are also US citizens, they obey American law.  In the past, Arapaho bands were led by traditional chiefs chosen by an Arapaho tribal council. Today, both Arapaho reservations are shared with Indians of other tribes, and these communities have leaders who are elected by all the Indians living there. Because a single tribe was created from two tribes who didn’t understand the others’ language, the Arapaho language was very difficult to preserve. Today Arapaho is an endangered language; however, some elders still speak the old language, and people of the tribe are working to keep their language alive.

Arapaho people lived in tall buffalo-hide houses called tipis (or teepees) which were carefully designed to set up and break down quickly. An entire Arapaho village could be packed up and ready to move within an hour. Originally tipis were only about 12 feet high, but after the Arapaho acquired horses, they began building them twice that size.

Arapaho women were in charge of the home. Besides cooking and cleaning, they built the family’s house and dragged the heavy posts with her whenever the tribe moved. Houses belonged to the women of the tribe. The men were warriors and hunters, responsible for feeding and defending their families. Only the men could become chiefs, but both genders told stories, composed music, created art, and medicines.

Although the Arapaho traded regularly with all of the tribes of the Great Plains, they also fought wars with the other tribes. Plains Indian tribes treated war differently than European countries did. They didn’t fight over territory, but instead to prove their courage, and so Plains Indian war parties rarely fought to the death and almost never destroyed each other’s villages. Instead, they preferred to count coup (touch an opponent in battle without harming him), steal an enemy’s weapon or horse, or force the other tribe’s warriors to retreat. So traditional Arapaho enemies like the Shoshones and Kiowas were not actually that unfriendly to them.