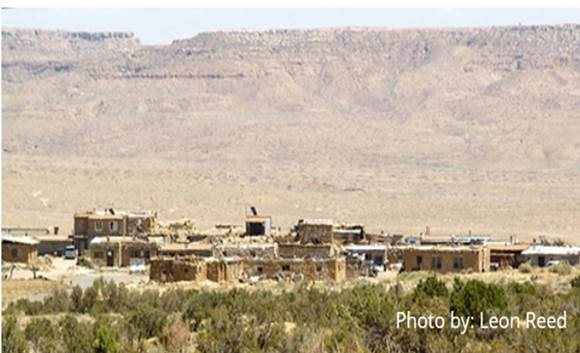 Considered the “oldest of the native people” the Hopi reside in 12 traditional villages, home to a total population of about 10,000. Each village is self-governing and members of the tribe identify themselves with their village and clan. The name Hopi is a shortened form of  Hopituh Shi-nu-mu meaning “The Peaceful People” or “Peaceful Little Ones”. Being Hopi is a concept deeply rooted in the culture’s religion, spirituality, and its view of morality and ethics. To be Hopi is to strive toward this concept, which involves a state of total reverence and respect for all things, to be at peace with these things, and to live in accordance with the instructions of the Creator or Caretaker of Earth, Maasaw.

In the villages of the Third Mesa, the women specialize in weaving plaques and baskets of multicolored wicker. These have ceremonial uses, but are also made for the craft market.

The Hopi are tightly knit together by matriarchal clan relationship; when a man married, he became a part of the woman’s clan. The women of the Hopi tribe were designated to take care of the home, look after the children, and cook. The men of the tribe were the hunters, weavers, and performers of various ceremonies. A tradition for Hopi children was to wait twenty days after they were born, then the parents would hold the child facing the sun on the 20th day. Once the sun hits the child, he or she was then given a name.