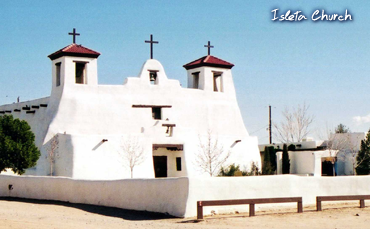 Isleta means “Little Island” in Spanish, but Isleta Pueblo is hardly “little” having an area of 211,002 acres and a population greater than three thousand.

Isleta has had a troubled history.  When the Pueblo Revolt began, many of the members fled to Hopi settlements in Arizona, while a number of Isleta people accompanied the Spanish in their retreat to El Paso del Norte.  After the rebellion was brought under control, the Isleta people returned to their former home, some bringing Hopi mates and half-Hopi Children.

When some members of the Laguna Pueblo and the Acoma Pueblo joined the Isleta community in the eighteen hundreds, friction within this heterogeneous society led to internal disagreement over religious and ritual matters. The solution to this conflict resulted in the creation of the satellite settlement of Oraibi.  The Pueblo today is comprised of two small communities, Oraibi and Chicale, and the main pueblo, Isleta. The language is generally Tiwa, with most people speaking English as well.  Agriculture is the principal occupation of the Isleta people.  A high portion of the population works outside the reservation, but a recent revival of pottery making is giving work to a number of artisans.

The Isleta Pueblo performs several dances open to the public during June, July and August as well as September Fair and Christmas festivals. Camping and fishing at Sunrise Lake on the Isleta Reservation are popular vacation attractions.