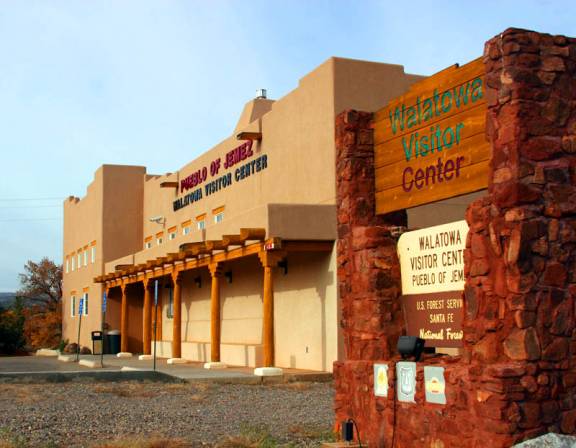 The Pueblo of Jemez (pronounced “Hay-mess” or traditionally as “He-mish”) is a federally recognized American Indian tribe with 3,400 tribal members, most of whom reside in a puebloan village that is known as “‘Walatowa” (a Towa word meaning “this is the place”). The Jemez nation migrated to “Canon de San Diego” region from the Four Corners area sometime between AD 1275 and 1350 occupying numerous puebloan villages that were strategically located on the high mountain mesas and in the canyons that surround the present pueblo of Walatowa, which now constitutes some of the largest archaeological ruins in the United States. The Pueblo of Jemez is an independent sovereign nation with an independent government and tribal court system.

Ancient Jemez pottery died out during the Spanish conquest of the southwest. It was revived in the 19th Century and today there are more than 500 Jemez artists working in clay. Jemez pottery is characterized by black-on-red and black/red on tan in storytellers, finely incised ware (some with blue slip), intricately painted geometrics and floral abstractions, and sculptural melon style pieces. The clay body is red to cream and potters may polish the surface to a high sheen or leave it a rough matte. Many of these bowls, seed pots, wedding vases, figurines, holiday ornaments, and storytellers are now in collections throughout the world. In addition, Jemez artisans also create beautiful basketry, embroidery, woven cloths, exquisite stone sculpture, moccasins and jewelry.

Walatowa is located in North-Central New Mexico, within the southern end of the majestic Canon de Don Diego. It is located on State Road 4 approximately one hour northwest of Albuquerque (55 miles) and approximately one hour and twenty minutes southwest of Santa Fe. You may read more about this unique and interesting people and their culture at http://www.jemezpueblo.com/History.aspx