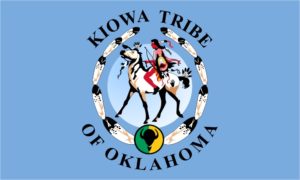 Kiowa is pronounced “kye-oh-wuh” which is an English corruption of the tribal name, Gaigwu.

The Kiowa Indians are the original people of Colorado, New Mexico, Oklahoma, and Texas who were forced to move to a reservation in Oklahoma during the 1800’s, and most Kiowa people still live in Oklahoma today.

Traditionally, Kiowa women were in charge of the home. Besides cooking and cleaning, a Kiowa woman built her family’s house and dragged the heavy posts with her whenever the tribe moved. Houses belonged to the women in the Kiowa tribe. Men were hunters and warriors, responsible for feeding and defending their families. Usually only men became Kiowa chiefs, but both genders took part in storytelling, artwork and music, and traditional medicine.

The Kiowa Indians lived in large buffalo-hide tipis designed to set up and break down quickly. An entire Kiowa village could be packed up and ready to move within an hour. Originally tipis were only about 12 feet high, but after the Kiowas acquired horses, they began building them twice that size.

Kiowa women wore long deerskin dresses painted with yellow and green tribal designs. Kiowa men wore breechcloths and leather leggings, and usually went shirtless. The Kiowas wore moccasins on their feet, and in cold weather, they wore long buffalo-hide robes. Later, Kiowa people adapted European costume such as cloth dresses and vests, which they decorated with fringes, ribbons, and fancy beading. Today traditional regalia are only worn on special occasions such as a wedding or a dance.

Learn more about the Kiowa people at www.kiowatribe.org  and from Native Languages of the Americas by Laura Redish and Orrin Lewis