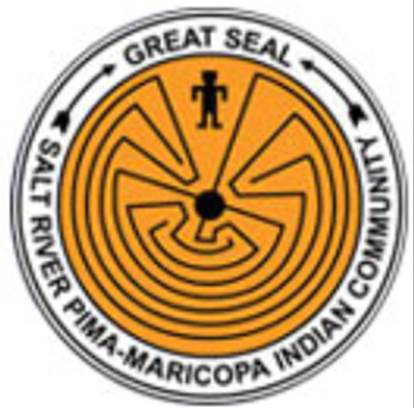 Maricopa is pronounced “mare-ee-coh-pah,” and it is a shortened form of the Spanish name for the tribe, Cocomaricopa. No one is really sure where that name came from or what it meant. It may have been a place name. In their own language, the tribe calls themselves Pi-Posh or Pee-Posh, which means “the people.”

Central to the beliefs of the Salt River Pima-Maricopa Indian Community is the story of the Man in the Maze, or I’itoi ki:k, which is the symbol seen on the great seal. This ancient pattern visible is representative of the journey a person makes through life, including obstacles and problems. The figure is called Elder Brother and he is about to make his way through the maze where at the center, he will find the Sun God, who is there to greet him and bless him into the next world. The is traditionally represented in petroglyphs and basket designs.

The Maricopa tribes, at one time, were bands that lived along the lower Gila and Colorado rivers. In the early 1800’s they migrated toward Pima villages. The Pima, known as a friendly tribe, established a relationship with the Maricopa. Both tribes provided protection against the Yuman and Apache tribes. The Maricopa Tribe was known for their red clay pottery work. Various jars and bowls were created for essential needs, made of natural materials. The clay was collected at various locations throughout the area. Natural dyes were used to depict geometrical designs. Maricopa pottery making essentially was non-existent by the turn of the 20th century. Traditional pottery practices enjoyed a revival from 1937 to 1940. US Home Extension Agent, Elizabeth Hart, worked with a leading Maricopa pottery, Ida Redbird, and formed the Maricopa Pottery Cooperative. Redbird served as president of the cooperative, which had 17 to 19 master potters as members. Hart encouraged members to sign their work. Swastikas were a common traditional motif that was abandoned in the 1940s, due to the Nazi usurpation of the image. The paddle and anvil method of construction is used. While utilitarian cookware is tempered, decorative Maricopa pottery has no tempering agent.