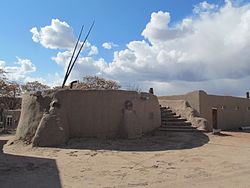 Nambe is only a few miles north of the city of Santa Fe.

In the Tewa language, spoken by the people of the Nambe Pueblo, the word Nambe means “People of the Round Earth.” Perhaps this is a reference to the landscape which encircles the Pueblo, with its spectacular beauty and the breath-taking view of the Sangre de Christo Mountains in the distance.

Few places in the State of New Mexico are as enchanting as this area and the nearby Nambe Falls. There is a fine art sculpture gallery along the road to the fall and good facilities for picnicking and fishing. Nambé Falls and Nambé Lake Recreation Area, located above the Pueblo are popular summertime locations for camping, fishing, picnics, events and organizational gatherings

Prior to the arrival of Spanish explorers, Nambé Pueblo served as the primary cultural and religious center for the northern New Mexican pueblo communities. The pueblo is a registered National Historic Landmark and is a major tourist attraction. The Nambe Pueblo is largely Hispanicized, and is almost completely surrounded by non-Indian residents, however, there has been a recent renaissance of interest in the traditional rituals and crafts, and the Nambe artists are making a comeback.

Weaving is being revived in the production of kilts and cotton belts.  Pottery too is once again being made in black on black and white on red designs similar to the work of the Taos and Picuris Pueblo Potters, however, the principal occupation of the Nambe people is farming, with some outside employment at Los Alamos.

Fourth of July is the time for the most popular festival of the Nambe Pueblo, when they perform dances and other ceremonies above the Pueblo at the spectacularly beautiful Nambe Falls. This and an October feast day attract a large audience both for the dances and the scenery.