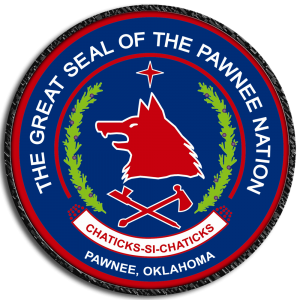 Pawnee is pronounced “paw-nee.” This was an English form of the Sioux name for the tribe. The Pawnee Indians are original people of Nebraska and Kansas. The Pawnee tribe was forced to move to a reservation in Oklahoma during the 1800’s, and most Pawnee people are still living in Oklahoma today.

The Pawnees live on a reservation, which is land that belongs to them and is under their control. The Pawnee Nation has its own government, laws, police, and services, just like a small country. However, the Pawnees are also US citizens and obey American law. In the past, each Pawnee band was led by a chief and a tribal council. Pawnee chiefs were always men, but they usually passed their position on to their sister’s children, not their own children. Today, the Pawnee tribe is governed by councilmembers who are elected by all the tribal members.

Pawnee men were hunters and sometimes went to war to protect their families. Pawnee women were farmers and also did most of the child care and cooking. Only men became Pawnee chiefs, but both genders took part in storytelling, artwork and music, and traditional medicine. The Pawnees traded regularly with other tribes of the Great Plains and the Western Plateau, such as the Comanche and Omaha. These tribes usually communicated using the Plains Sign Language.

The Pawnees also fought wars with other tribes. Plains Indian tribes treated war differently than European countries did. They didn’t fight over territory, but instead to prove their courage.   Rarely did Plains Indian war parties fight to the death or destroy each other’s villages. Instead, their war customs included counting coup (touching an opponent in battle without harming him), stealing an enemy’s weapon or horse, or forcing the other tribe’s warriors to retreat. Some tribes the Pawnees frequently fought include the Apache, Kiowa and Sioux. Most Pawnee Indians lived in settled villages of round earthen lodges. Pawnee lodges were made from wooden frames covered with packed earth. When the Pawnee tribe went on hunting trips, they used buffalo-hide tipis (or teepees) as temporary shelter.

In the past, Pawnee women wore deerskin skirts and poncho-like blouses. Pawnee men wore breechcloths and leather leggings. Men did not usually wear shirts, but warriors sometimes wore special buckskin war shirts. The Pawnees wore moccasins on their feet, and in cold weather, they wore long buffalo-hide robes. A Pawnee lady’s dress or warrior’s shirt was fringed and often decorated with beadwork and painted designs. Pawnee Indian leaders sometimes wore the long Native American headdresses that Plains Indians are famous for. More often, Pawnee men shaved their heads except for a scalplock (one long lock of hair in back) and wore a porcupine roach on top. Pawnee women wore their hair either loose or braided. The Pawnees also painted their faces for special occasions. They used different patterns for war paint, religious ceremonies, and festive decoration. Today, traditional clothing is worn for special occasions, such as a wedding or a ceremonial dance.