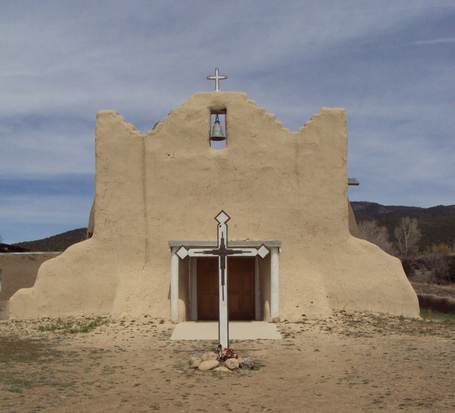 Picuris, pronounced “Pick-ah-reese,” was called by its neighbors “pikuria”, or “those who paint”. Picuris Pueblo is nestled in a setting of serene beauty in what is known as the “Hidden Valley” of the Sangre de Cristo Mountains of Northern New Mexico. It is located just 60 miles north of Santa Fe, and 24 miles southeast of Taos on scenic route 76.

Once one of the largest northern Pueblos early in the fifteenth century, today the Picuris population has shrunk to less than three hundred. Largely responsible for this decline is the period of the revolt, from 1680 to 1696 when all the Pueblos fought the Spanish conquerors for their land and their autonomy. The Picuris returned to their once-abandoned Pueblo in 1706 and joined with their former oppressors in campaigns against hostile Apaches and Comanches, who were attacking both Spanish and Pueblo settlements. After the cessation of these hostilities the Picuris settled down again.  Peace brought many changes to the lifestyle of the Pueblo.  The old ceremonies and rituals had been replaced by Christian religious practices and the tribal government had yielded to the Spanish authorities and later the Americans.

By the mid-nineteen-twenties, the Picuris reintroduced their traditional customs and again became self-governing.

The amenities of Anglo civilization which the Picuris had become accustomed to in the years of co-existence still found their way into the Pueblo: electricity, telephone, television and paved roads changed the aspect of the Pueblo.

Most of the adult population works off the reservation and the children go to school in a nearby town.  Still Picuris life today is marked with many of the traditional ceremonies which have been revived and can be seen throughout the year.

The Picuris craftsmen produce an unusual pottery, different from most Pueblo art, in that it is strictly utilitarian and without ornament.  It is made of micaceous clay and has an interesting texture with a subtle glitter caused by the small chips of mica in the mixture. It is unpainted and unpolished, and decorated, if at all, only with such sculptural features as knobs, ribbons, or punching. The unpolished surfaces of the vessels were often intentionally roughened with combings or other striations, especially in the eighteenth and nineteenth centuries. Some were constructed by pressing the clay into baskets, thus producing a characteristic surface that looks as though a corncob had been rolled over it. Picuris pots are characterized by their mottled appearance, which varies from glittery orange metallic to almost black, while Taos pots are often more uniform in color. They have a long history of creating beautiful arts, crafts, and pottery. This tradition of artistry continues to this day. They have a Gallery/Gift Shop at the Pueblo or in their hotel where arts, crafts, and original paintings may be purchased.