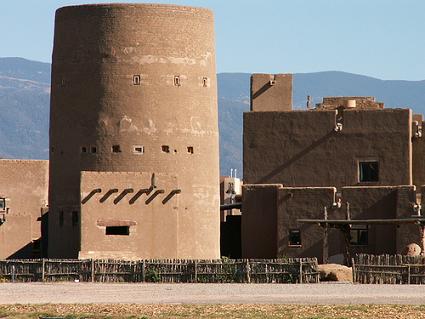 Pojoaque Pueblo, pronounced “Po-wock-ee or Po-hock-ee”, is one of the six Northern Tewa speaking Rio Grande Pueblos.  Archeological studies of the area have dated inhabitation of the historic Pojoaque Pueblo area as early as 500 AD with a large prehistoric population in the late fifteenth and early sixteenth centuries.  Pojoaque has always maintained a strong cultural identity and was known by its Tewa speaking neighbors as “Po-suwae-geh” – the water drinking or gathering place.

In the early 1600s the first Spanish mission San Francisco de Pojoaque was founded. In 1706, Pojoaque Pueblo was resettled by 5 families.  By 1712 the population reached 79.  By the 1800’s the land base was being encroached upon by non-Indians and an official land grant was patented by Abraham Lincoln with the presentation of a silver cane of authority to the Governor of Pojoaque.  The Pueblo was further devastated a few years later by a smallpox epidemic, lack of water, encroaching non-Indians, and a lack of arable land base for agriculture.  Around 1900, the Pueblo of Pojoaque was once again abandoned, its people migrating to other villages in the region.

In 1934, the Commissioner of Indian Affairs issued a call for all Tribal members to return to the area.  In 1936 the Pueblo of Pojoque became a federally recognized Tribal Reservation with enrollment at 263 members. In 1973, Pojoaque Pueblo’s progressive approach led to the election of the first woman governor in the Rio Grande villages, Thelma Talachy.  At present the Poeh Cultural Center is responsible for undertaking a vocational/educational approach to teaching Native Studio art to Indian students as part of a process of cultural regeneration.

Pojoaque Pueblo, situated nearly 15 miles (24 km) north of Santa Fe off U.S. 84/285, offers a roadside glance into Pueblo arts. It is one of the Eight Northern Pueblos and is just 6 miles (10 km) north of the famous Tesuque Pueblo. This Tewa-speaking pueblo is a primary center for traveler services. However, it is very small and does not have a definable village.

The major attraction here is the Poeh Cultural Center and Museum, maintained and managed by the Pueblo. It is located within a large complex of adobe buildings, including the three-story Sun Tower and it comprises of a Museum, artist studios, and a cultural center. The Cultural Center and Museum feature frequent exhibitions on Pueblo art, traditional ceremonial dances, and artist demonstrations. The Center is also home to an information center and also, the largest Indian arts and crafts shop in northern New Mexico which exhibits and sells locally made sculpture, rugs, pottery, sand paintings, kachinas, and other souvenirs. The main annual cultural events held at the Pueblo include the buffalo dance performed on the occasion of Pueblo’s revived feast day, which is observed on December 12, in honor of Our Lady of Guadalupe. Besides, there are many other dances performed on January 6.

The pueblo just opened the new Towa Golf Resort for visitors and locals alike. In 2008, the Buffalo Thunder Resort became the largest and most extravagant resort in New Mexico