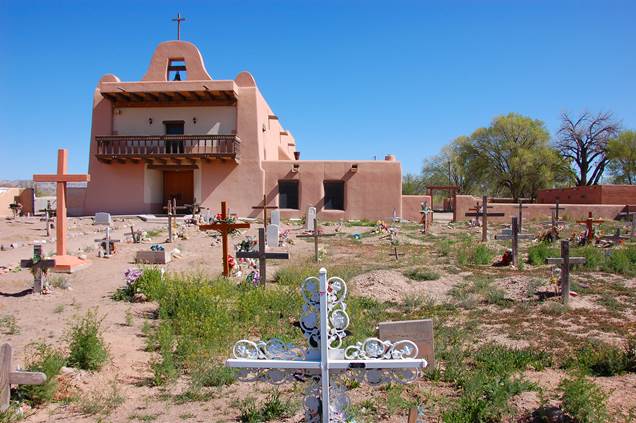 Traditional Name: Po-woh-ge-oweenge “Where the water cuts through”

Located approximately 20 miles north of Santa Fe, San Ildefonso, pronounced “San Ill-day-fon-so”, is one of the best known New Mexico Pueblos because of the famous black-on-black pottery which originated there and which was revived in the nineteen-twenties.

At that time San Ildefonso, like many other Pueblos, was suffering a severe economic depression.  Long standing internal conflicts, encroachment upon tribal lands by squatters and illegal cutting of timber all contributed to the low subsistence level to which the Pueblo had fallen.  When American Indian crafts began to be popular with collectors, it was fortunate for the San Ildefonso people, because although the Pueblo population was small, there were a number of skilled artisans, makers of pottery and painters, who set to work to improve the economic condition of the Pueblo.  Before long, the outstanding quality of San Ildefonso pottery became known.  It was then that the famous black pots were revived, primarily because of Maria Martinez and the tourist trade.

San Ildefonso pottery and Santa Clara pottery share much of the same characteristics with only minor differences in evolution and execution. San Ildefonso potters make polychrome red and buff ware, incised red and black ware and two tone buff and black ware. Maria Martinez (1888 – 1980) and her husband Julian (1885 – 1943) are credited with originating a matte decoration over polished black ware around 1920, which has become the iconic style of San Ildefonso. Innovation and experimentation continued however and Maria’s nephew Albert and his wife Josephine Cordova are credited with innovating white on red ware pottery from San Ildefonso. Rose Gonzales and her son Tse Pe were also innovators and Tse Pe along with his first wife Dora originated stone inlay into their pieces.

Today, they command the respect of world-wide collectors of fine art.  Other artists, potters and watercolor painters came to the attention of the public and although the Pueblo is one of the smallest in population, it is among the best known.

The San Ildefonso people have lived in the present site since before thirteen hundred A.D.  They have a strong sense of identity and retain ancient ceremonies and rituals tenaciously, as well as tribal dances.

Other dancers are held in June, July and September.