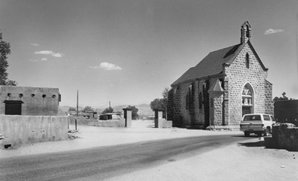 San Juan Pueblo has become Ohkay Owingeh (pronounced O-keh o-WEENG-eh), which translates to “Place of the Strong People.”  San Juan Pueblo is no more. The pueblo’s tribal council restored the community’s traditional name in September 2005. Former New Mexico Governor Bill Richardson instructed all state agencies to refer to the pueblo by its new name. The new name is the traditional name for the village, used before the Spanish arrived 400 years ago.

The Ohkay Owingeh people have a complex and fascinating cultural history.  They divide the physical world into three parts: the village and surrounding land, which is the realm of the women, the second circle is comprised of the hills and mesa surrounding the first circle and is the realm of both men and women: the third circle encompasses all beyond the second and is the world of hunting and protection form a hostile outside world, and this is the exclusive realm of the men. Great importance is placed upon the teaching of responsibility.  Although many Ohkay Owingeh people work outside the Pueblos, most of them return for ritual occasions and ceremonies.

One of the most interesting aspects of the Ohkay Owingeh Pueblo life for the visitor to the Oke Owinge Arts & Craft Cooperative are the numerous ceremonies that take place throughout the year, under the auspices of the two-part social system, the Winter People and the Summer People. The Deer Dance, for example, which is performed to assure prosperity for the coming year, is conducted by the Winter People in January or February. As in many other dances, humor is an important element, here furnished by caricatures of Apache hunters, who stalk the dancers and pretend to hunt them with sunflower stalk arrows.  There are Buffalo Dances, Basket Dances and a Cloud Dance at various times of the year, and at some of them, the traditional clowns accompany and tease the serious dancers.

In 1930, Regina Cata, of the pueblo, organized a pottery study group at what was then San Juan Pueblo with the intent of revitalizing pottery production. The group studied ancient potsherds of wares made at San Juan in earlier times and selected Potsuwi‘i Incised Ware (1450-1500) as a basis for a contemporary pottery type. By the 1950s, further development resulted in deep carved polychrome wares, which are still being produced today. On this type, the rim zones and underbodies are highly polished red slip while the main body of the vessel remains matte. The design is carved and painted in the main body zone.

The Ohkay Owingeh Pueblo has a well-known art center, the Oke Owinge Arts & Crafts Cooperative where visitors may watch many of the artisans working in a variety of art forms, and where jewelry, pottery, and other work from over one hundred artists may be purchased.