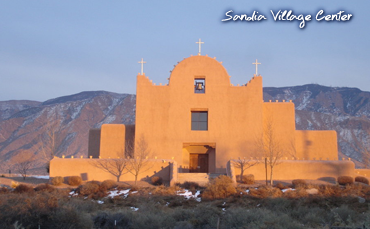 Sandia Pueblo, whose traditional name is NA-FIAT, is perhaps the least known and understood of the dozens of Pueblo cultures than once dominated the Rio Grande Valley. The reservation covers 22,877 acres on the east side of the Rio Grande Valley. The Sandia people are members of the pre-Columbian Tiwa language group who once dominated the Albuquerque area.  Their lineage can be traced back to the Aztec civilization, who later migrated to the New Mexico region. The present site has been home to the Sandia people, where they have cultivated the land and raised their families since 1300 AD. The Sandia Mountain provides the source of their spirituality as well as plants, animals and other resources which have been critical to their survival in this desert region. Once the largest pueblo in the area with over 3000 people, they currently have just under 500 members