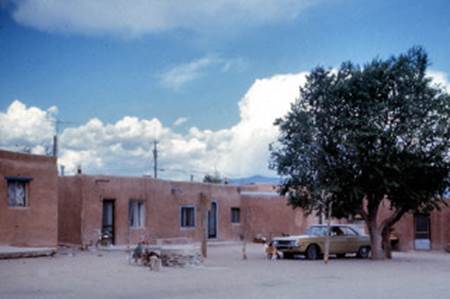 Santa Clara Pueblo, whose traditional name is  Kha’p’oo Owinge  (Valley of the Wild Roses), is located 26 miles north of Santa Fe along the Rio Grande River and dates back to the 12th century. Santa Clara Pueblo offers visitors a number of highly diverse attractions, from tours of the pre-historic cliff dwellings of Puye to sightseeing, fishing and camping in the nearby canyon.  Because Santa Clara Pueblo has such a large land base, with a wide variety of geographic features, it was possible to make good use of the natural resources for recreational purposes.  There are few places in New Mexico that can compare with the majestic beauty of the landscape of the homelands of the Santa Clara people. This use of natural resources coupled with the beauty of the landscape has enabled the pueblo to maintain a strong tribal government and a prosperous economy.

Thanks to cultural pride and a strong sense of identity, the Santa Clara people have retained many of their ancient traditions while integrating with the best of what the majority culture has to offer.  The Pueblo has a high regard for education, both the tribal heritage and modern education.  Santa Clara Pueblo people find employment on the reservation as well as in nearby cities.

Santa Clara potters have been making a highly polished black ware, since the late 19th Century and are known for their wonderful carved red ware and black ware, as well as polychrome on red ware. Sara Fina Tafoya (1863-1949) is credited with developing the deep carving now characteristic of much Santa Clara pottery and which was carried on by her daughter Margaret. In addition to her incredible ability to mold large storage jars, she mastered the use of a simple impressed bear paw motif that has become synonymous with Santa Clara pottery. Today Santa Clara produces a wide variety of forms and styles as evidenced by the overwhelming number of potters who participate in Santa Fe’s yearly Indian Market.