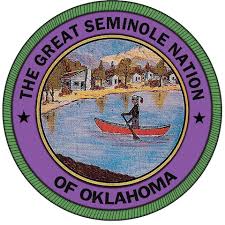 In the 1700’s, many Indians from Georgia and Florida tribes–Creeks, Miccosukees, Hitchitis, and Oconees–joined together for protection. These tribes originally had unique cultural identities, but soon merged into a unified Seminole nation. Over the next century, Native Americans from other tribes and African-Americans, who escaped from slavery, crossed the border into Florida to join the Seminoles.

The Seminoles began in northern Florida, but when the Americans attacked them, the tribe retreated further south, into the Everglades. Although some Seminole people were forced to move to Oklahoma in the 1800’s, other Seminole people still live in southern Florida today. During the American Civil War, most of the Oklahoma Seminole allied with the Confederacy, after which they had to sign a new treaty with the U.S., including freedom and tribal membership for the Black Seminole. Today residents of the reservation are enrolled in the federally recognized Seminole Nation of Oklahoma, while others of Florida belong to unorganized groups.

The Seminole people lived in houses called chickees. Seminole chickees were made of wood and plaster, and the roofs were thatched with palmetto fiber. Originally, the Seminoles lived in large villages of chickees arranged around a town square with central buildings. Those Seminoles who moved further into the remote swampy areas of the Everglades built their houses on wooden stilts that raised the floor two or three feet off the ground protecting their homes from flooding and swamp animals.

Seminole men were hunters and sometimes went to war to protect their families. Seminole women were farmers and also did most of the child care and cooking. Both genders took part in storytelling, artwork and music, and traditional medicine. In the past, the chief was always a man, but today Seminole woman participate in government too.

The Seminoles are known for their Native American baskets, woodcarvings, beadwork, and patchwork designs.