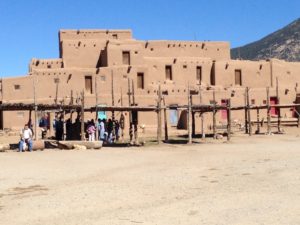 Taos Pueblo today stands as the largest surviving multistoried Pueblo structure in the United States. A visit to the Pueblo is to experience the spirit and unique way of life that continues much as it has for nearly ten centuries. In 1960, Taos Pueblo was designated a National Historic Landmark; it was added to the National Register of Historic Places in 1966. In 1992, the Pueblo was admitted by the United Nations to the “World Heritage List,” due to its uniqueness and universal value to the heritage of all mankind.

Taos pueblo is rich in culture and history of the people who continue to live there, as well as of those who came before. Using techniques passed down through generations, numerous artists have fine arts and crafts to sell which in include pottery, painting, sculpture, and drums. Taos pottery is made of clay rich in mica, thus requiring no additional tempering agent.  The classification of Taos pottery is Taos Micaceous and dates back to the mid-1500s.

Dances are held throughout the year, and most are open to the public offering the chance to experience songs and dances that have transcended time and are passed down from generation to generation.