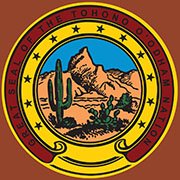 The Tohono O´odham or Desert People are a Piman-speaking group who live in southwestern Arizona and northern Mexico. The basketry work of this group has long been renowned for its sensitive and beautiful works created of the simplest of materials in the harsh environs of the southwest. Descendants of the ancient Hohokam peoples, this people have extensive roots in the southwest, reaching long into the prehistoric past.

Although the Tohono O’odham were previously known as the Papago, (meaning literally “bean eater”), they have largely rejected this name. It was applied to them by conquistadores who had heard them called this by other Piman bands that were very competitive with the Tohono O’odham.

In the past, each Tohono O’odham village had its own chief. Tohono O’odham chiefs were looked to for leadership, but they did not make decisions for the tribe. When there was a political decision to make, every member of the tribal council had to agree before the tribe could act (this is called consensus.) Sometimes this could take a long time, but the Tohono O’odham people really value harmony, so this was an important system for them. Today, the Tohono O’odham tribe is led by a tribal council elected by the citizens, and the council members still work by consensus much of the time.