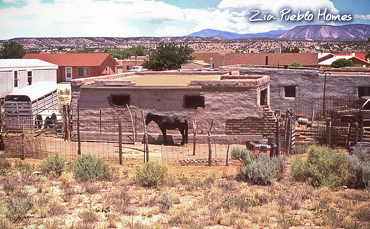 To anyone traveling along the road eighteen miles northwest of Bernalillo, New Mexico, Zia Pueblo is almost invisible.  It is situated on a rocky knoll, where it blends into the landscape like a natural feature of the terrain.   Although the Pueblo itself is inconspicuous, its Sun symbol is familiar to all New Mexicans, for it is the official New Mexico State insignia appearing on the state flag and adopted by the New Mexico Legislature in its salute, “I salute the flag of New Mexico, the Zia symbol of perfect friendship among united cultures.

The Zia are a small community of agriculture workers and livestock raisers, but they have a strong sense of identity and have produced beautiful traditional works of art.

Prominent among Zia crafts is pottery, unpolished redware with white slip, with decorations in brown or black are produced often with a bird motif.  The Zia tradition is faithfully adhered to; innovation is avoided.  Some Zia painters have achieved recognition for their watercolors.