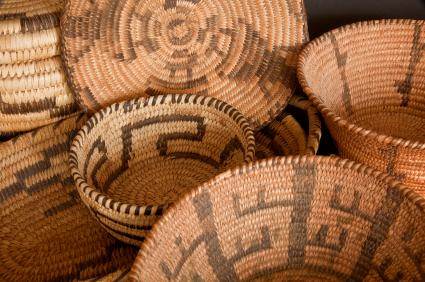 Basket making was one of the earliest skills developed, since baskets were needed for carrying goods, for storage, for trapping and fishing, and for religious ceremonies.  Unlike pottery, baskets do not survive for extended periods of time.  Most that are available today were constructed in the last 120 years, particularly after native people in the Southwest began to make baskets with the idea of selling them and moved baskets into the category of artistic collectibles.  Those made between 1880 and 1950 tend to be the most valuable, particularly if they are in good condition, well-made, and have an interesting design, but these latter factors can make any basket desirable, even newly made baskets.

The most common type of basket construction is coiling in which a larger substance is coiled in circles starting at the center.  A thinner material is stitched around the coils to hold them in place. This material can add decoration.  Sometimes, the thick material is actually a bundle of thin materials like grasses.  The coil is spiraled outward and, unless the intent is a plaque, upward. This method offers more strength and more opportunity for decoration.  Another common process is called twining and involves placing larger material or rods from the center outward and tying these supports together.  The thinner materials that are wrapped over and under the supports again provide decoration.  Plaiting requires the use of flat strips that are woven over and under each other.  Often, the strips are placed in a diagonal pattern.  A mixture of variations adds to the design.  This style tends to be easier than the other two and creates stronger, more rigid baskets.  Wicker is similar to plaiting but uses round materials with one of the sets being thicker and adding stability to the material.  Often the thicker material is less visible or completely covered by the thinner material.

APACHE–Earlier Apache baskets were usually coiled and used three rods making these baskets very sturdy and stiff.  By 1930, production of these baskets declined as children went schools that did not teach basket making and older members of the tribe began to do other work.  The basket making skills seemed to die out for a decade and were eventually replaced by making of simpler single coil ones.  Apache designs were less symmetrical and, at times, seemed cluttered.  They frequently included figures (human, dog, deer, and snake).  Weavers suggested that it was helpful to let the basket talk to them and tell them the design rather than planning it ahead of time.  As a result, there has been less consistency in weave, as well as design, but such variation can add interest.

Hopi baskets stand out for the amount of color used and reflect extensive production of dyes.   Blues, yellow and orange are common. Kachina designs are common as are plaques. Ceremonial plaques are made by a bride’s family and given to the groom’s family as repayment for the bridal robes that are traditionally woven by men of the groom’s family.   Brides will also often make one for her husband, but will leave it undone to suggest that his life remains unfinished. Today many plaques are made to supplement a family’s income and sold to collectors and basket lovers.

NAVAJO–Navajo basket making has declined in recent decades, but survives because of the importance of wedding baskets. Such baskets are used as part of the religious wedding ceremony and are expected to reflect a common pattern: The center is a star with four white points representing the four sacred mountains that surround the Navajo land.   These mountains surround an open area representing where the Diné first emerged into this world and is surrounded by a white area representing birth.

The design also includes an open path between the center and the outside area that is expected to allow thoughts and prayers or spirit to emerge.   This path typically will not point toward the bottom of the basket.  The outside rim usually ends at this point to make it easier for the person conducting the ceremony to locate this path.  The path is usually pointed to the east during ceremonies.  Red circles surround this central area and represent sunshine and provides a source of health and spirituality.  The black represents the night and clouds that bring rain. The white around the outside is thought to represent the dawn and the outside edge is where a person’s thoughts and prayers collect. The baskets are coiled with a very tight weave that allows corn meal porridge to be poured into the basket for the wedding ceremony.  Sumac is commonly used for the tan color and can be brighter or darker depending on how long the sumac was allowed to dry.  The warp is usually thick with the use of two rods for the coil keeping the basket firm.  The red and black are added with dyes.  In addition to weddings, these baskets may be used to carry religious objects, to hold yucca suds for ritual baths or washing hair, and to hold the items used to bless girls during their coming of age ceremony.  The basket can also be turned upside down and used as a drum.

TOHONO O’DHAM–The Tohono O’Odham (which in their language means Desert People) are assumed to have descended from the Hohoka.  Their traditional baskets are coiled from bundles of bear grass sewn with yucca that has been bleached white in the sun.   They also add devil’s claw seed pods for black and unbleached yucca for green or yellow-green.  In closed stitch baskets, the weft is wound tightly covering the warp.  In open stitch ones; there is space between the weaves so that the warp shows through. The Akimel O’Odham

have very similar basket making practices, but use willow and cattail which are more abundant in their area.  The cattail was bundled for the coil and the willow was used for weaving.  Devil’s claw was used for the dark part of designs.  Cattail is more supple than bear grass making their baskets more pliable. Both groups usually start with a four square or plaited knot and then wrap the bundles around this center.  The basket walls are pounded with stones to make them smooth and flat.  Basket making has gradually declined with the Akimel O’Odham, but is still common among the Tohono O’Odham. Certain designs commonly used include the Man in the Maze, the Sunflower, and the Turtle.