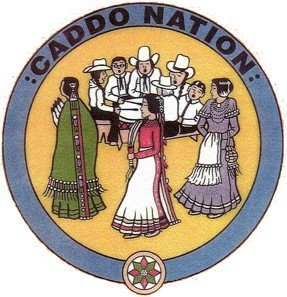 The Caddo Indian’s homeland was originally a four corners area of Texas, Oklahoma, Louisiana and Arkansas. The term Caddo derives from the French abbreviation of Kadohadacho, a word meaning “real chief” or “real Caddo” in the Kadohadacho dialect. Although the Caddo people existed at the same time frame as the Anasazi of New Mexico, the Caddo were first documented by De Soto and his expedition in 1542.  Archelogy has shown that the Caddo have been in their original homeland for over 2500 years. In the early 19th century, the Caddo people were forced to a reservation in Texas, then removed to Indian Territory in 1859

In prehistoric times, the Caddo lived in communities of grass and cane covered houses, with the communities composed of farmsteads, villages, and the civic-ceremonial centers. The Caddo peoples developed a successful horticultural economy based on the cultivation of maize, beans, and squash.  After the introduction of the horse in the late seventeenth century, the Caddo began to participate in winter communal bison hunts on the prairies to the west of their settlements.

They developed long-distance trade networks as well. Important items of trade were bison hides, salt, and bows, along with copper, stone, turquoise, as well as finished objects such as pottery vessels and large ceremonial bifaces. Many of the more important trade items were obtained from great distances (e.g., turquoise from New Mexico, copper from the Great Lakes, and marine shell from the Gulf Coast), and these items were often placed as grave goods in the burials of the social and political elite. The Caddo peoples produced high quality tools, clothing, ceramic vessels, basketry, and ornaments. The Caddo are particularly well known for the beautiful artistic and functional ceramic wares they made of many forms and functions, and the ceramics are considered some of the finest aboriginal pottery manufactured in North America

During the late seventeenth century and into the eighteenth century, the Caddo participated in the fur trade, also trading guns, horses, and other items to Europeans and other Indians. They also continued to develop new trade and economic networks. The result of this trade relationship was an important means of acculturation, because great quantities of European goods became available to the Caddo.

Although some groups of Caddo continued to live through the 1830s in their traditional East Texas homeland, other groups moved to the Brazos River in north central Texas. They remained there until they were placed on the Brazos Indian Reservation in 1855, and then in 1859 the Caddo (about 1,050 people) were removed to the Washita River in Indian Territory, now western Oklahoma.

Adapted from information found in  Handbook of Texas and CaddoPottery.com